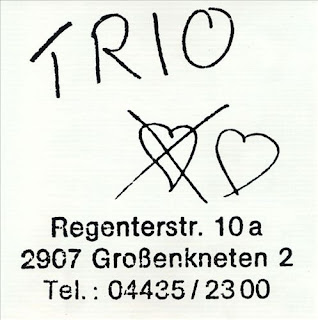 [Da Da Da] -- I wasn't certain what I wanted for the Flashback this week until midway through the week itself. For some reason, "Da Da Da" by the German band, Trio, got stuck in my head. Now, Trio formed in Großenkneten in 1980, and released their first self-titled album in 1981. "Da Da Da ich lieb dich nicht du liebst mich nicht aha aha aha" -- usually better known by its shorter name, "Da Da Da." That song wasn't heard in the US until it was re-released on the band's second album, Trio & Error (1982). I didn't hear "Da Da Da" until about 1986 or 1987. And when I first heard it, I was under the impression that Trio was a man, a woman, and a Casio keyboard. But ... nope. The band was three dudes named Stephan Remmler, Gert Krawinkel, and Peter Behrens. They recorded four albums together, and released about 10 singles, but they're pretty much known only for "Da Da Da." It was a hit in over 30 countries, and resurfaced in the 1990s for a Volkswagen commercial. See the original "Da Da Da" video and hear more Trio tracks after the jump. If you're only familiar with their bit hit, you might be surprised to hear their more rocking side.

(You can also hear the English version, "Boom Boom")