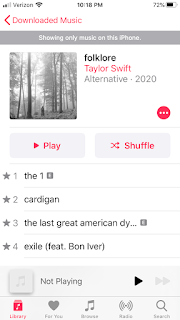 I never thought I would do an album review but I just can't keep quiet about this album. I am enthralled with it and I can't stop listening to it.

About 3 weeks ago someone mentioned how much they missed listening to an album from beginning to end and I realized that I also have not done this in quite some time either.

Then 2 weeks ago on a Zoom call someone mentioned Taylor Swift's new album Folklore and how much they loved it. That it wasn't typical Taylor and it was very soothing in fact. I was intrigued and downloaded the album while on the call.

For the past week, I have had the album pretty much on repeat and I still can't stop.

It is glorious. It is ethereal. It is soothing and calming. It is angry and quiet. It is sweet and lovely. It is everything I didn't know I needed in an album.

I would love to write up and dissect each song but the album isn't about that at all. It is all about getting lost in the sounds and the words and the FEEL of the album. I just sink into it each time it starts and it wraps itself around me and soothes my soul. Even the angry songs just pierce right into me and free the tension.

I bought the explicit lyric version of the album and I am glad I did. It feels honest and it certainly is not overly explicit and I feel the lyrics are valid and necessary.

My most favorite song is exile featuring Bon Iver. Their voices are spectacular in this song and the harmony and lyrics are divine.

"...there's nothing like a mad woman" is my other most favorite song if just for the title alone. I even had to buy the shirt with this lyric on it from her online store. I already own a Shake It Off shirt and sticker on my computer, as that was and probably still is my theme song. NOTHING on this album is like that song, though, so do not go into this album expecting anything like that song. This is reflective Taylor Swift and I adore it and her.