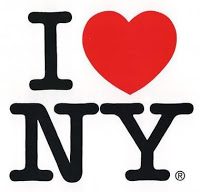 This is a reworking of a 9/11/2015 post that itself was a reworking of the original post that appeared on 9/9/2011 (and both of those prior posts were on Prophet or Madman).
[I Love NY, on September 11 and Always -- Redux 2] -- On September 11, 1981, the top song in the U.S. was "Endless Love" by Diana Ross and Lionel Richie (#1 on the Billboard Hot 100 from August 9 to October 10). In baseball, the Detroit Tigers defeated the Cleveland Indians at Tiger Stadium. Movie goers were about to lift Arthur to the role of top-grossing movie for that weekend. Confirmation hearing for Supreme Court nominee Sandra Day O'Connor ended. On the world stage, the U.S. accused the USSR of using poison gas in Laos, Cambodia, and Afghanistan. The Soviets began amphibious landing exercises on the Polish coast as part of naval training in Baltic Sea even while pressure for democracy was mounting within Poland. Egyptian President Anwar Sadat claimed Referendum results supported his crackdown efforts against opposition forces, and the Ayatollah Khomeini's personal representative was assassinated in Tabriz, Iran. And a private plane crashed into the Swing Auditorium, a legendary concert venue in San Bernardino, California, damaging it beyond repair.

Just shy of 40 years later, we are once again remembering the aftermath of a trio of plane crashes that occurred on the East Coast, destroying an architectural icon in downtown New York and devastating our national psyche. I have previously written about 9-11 (The Real "Never Forget," They Crashed the Planes and Changed the Rules, and Visit to United Flight 93 Memorial for example). But I have yet to do so from the lens of 80s music. So, this week, the Friday 80s Flashback celebrates New York City. Wondering what songs we have for the Big Apple? Read and hear more after the break.

Flashback #1: "It's like a jungle sometimes it makes me wonder how I keep from going under."
Our first flashback comes from one of the most notable records in the history of hip-hop. In 1982, Grandmaster Flash and the Furious Five released their debut album, The Message. The title track of this landmark record is often cited among the most influential hip-hop songs. Lyrically, "The Message" does not paint New York City in the most flattering of lights, but the gritty realism here is almost documentarian in nature. They also showcase the paradox of the love/hate relationship one can have with their environment -- I love this city, but I hate my conditions. And I have to wonder: What would Grandmaster Flash's message be today?
Flashback #2: "I'm an alien. I'm a legal alien."
On his 1987 release, Nothing Like the Sun, Sting sings about an "Englishman in New York." He wrote the song shortly after Quentin Crisp moved from London to New York neighborhood known as the Bowery. Mr. Crisp died in 1999, so we'll never know his reaction to the 9-11 attacks, but I didn't select the song on his behalf. At least not entirely. The lyric I've quoted above puts me in mind of a subject that has always been difficult, but has taken on a divisive tenor in the aftermath of the 9-11 attacks: immigration. I make no claims to a higher wisdom regarding illegal, or even legal, immigration. But I do believe future generations will judge us according to how well, or how poorly, we address immigration policy. Another reason for including this video is the wonderful black and white footage taken in New York City.
Flashback #3: "New York, you're gaining on me."
In 1984, Queen's frontman Freddie Mercury (1946 - 1991) was working on his first solo album, Mr. Bad Guy. During those sessions, he recorded a demo of "New York" at Musicland Studios in Munich in 1984. The song was never finished or released. You can find copies of the demo in varying degrees of quality all over the web. One enterprising fan has gifted us with a mix made from the best demos he could find. It's a loving tribute to both the spirit of Freddie, and the city where he owned an apartment from the early 80s to his death in 1991.
Bonus Flashback: "I want to wake up in that city that doesn't sleep."
Surprised to see a Bonus Flashback again so soon? Well, I can't do a post about NYC songs and not include what is arguably the most famous song in that category: "The Theme from New York, New York." I can hear your opposition: "But, that song isn't from the 80s!" And you would be correct, but only partly so. Yes, the song was written in 1977 for the film, New York, New York with Liza Minnelli performing the film version. But in 1979, Frank Sinatra recorded the song for his 1980 album, Trilogy: Past Present Future. "New York, New York" has since achieved iconic status. The Sinatra performance here was recorded live sometime between 1981 and 1982, and it is set to a wonderful collection of NYC images.
Well, that's all till next time. Dedicated 80s-philes can find more flashbacks in the Prophet or Madman archives or via Bookended's 80s Flashback tag. As always, your comments are welcome on today's, or any other, flashback post. And if you like what I'm doing here, please share the link with your friends. If, however, you don't like the flashback, feel free to share it with your enemies.
I'll see you in seven!
Posted by Brainwise at 9/11/2020 03:27:00 PM