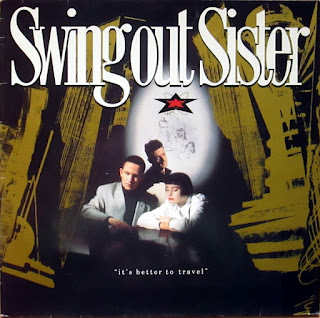 [Breakout] -- Swing Out Sister started out as a trio, but became a duo during the making of their sophomore album. Fortunately, that duo still included vocalist Corinne Drewery. As an act, Swing Out Sister has a catalog of 10 studio albums, two of which were recorded and released in the 80s. In fact, their debut album, It's Better to Travel, was released 32 years ago as of tomorrow, May 11. So, let's celebrate SOS's anniversary with some selections from that debut album. I know you're wondering if your favorite made the cut. And to find out, you'll have to read and hear more after the jump.

"Blue Mood" was Swing Out Sister's debut single. Released in the UK in 1985, it didn't chart. It later appeared on the band's debut album, It's Better to Travel (1987). Do you remember when you first heard it, or saw the video?

Flashback #2: "The time has come to make or break | Breakout, don't stop to ask."

Flashback #3: "Don't be fooled by love songs and lonely hearts."

Our final flashback was Swing Out Sister's fourth single: "Twilight World." Released in April (UK) and December (US) of 1987, this song was a commercial success, though not nearly as successful as "Breakout." It peaked at #32 on the UK Singles Chart, as well as reaching #9 and #31 on the Billboard Hot Dance Club Play chart and the Billboard Hot 100 respectively. And I'm sure you've heard it at least once in the last 32 years -- or however long you've been around.