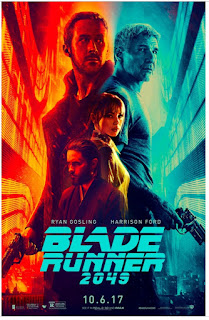 So Brainwise asked me to DVR Blade Runner 2049 when we had free Cinemax. I’ve been curious about it too so I obliged. We finally got around to watching it the Saturday night of Memorial Day.

I vaguely remembered the original which I had seen once but Brainwise remembered enough to help fill in gaps.

This would have been a great movie... IF...if they cut down on the long drawn out scenes. Oh my goodness this movie was looooong and not in a good way at all. In fact a few times I sighed in frustration at the time scenes were taking. Cut all that out and you have a much better movie.

The concept was good and it was carried out well overall. The cinematography was excellent and the music was good although I am surprised I didn’t think it was great. It had a lot of sounds that I like but it just overwhelmed too much and I almost wished we turned off the closed captioning because the description of the music was laughable and unfortunately it did influence how I felt about the music in some scenes.

Jared Leto overdid his scenes and Harrison Ford just seemed to be going through the motions. I liked the twists the movie took but I did figure it out and I was sad about that. I would much rather had been surprised but perhaps if they didn’t have the long scenes to think about other things during, I might not have figured it all out :)

I sometimes base my feelings for a movie based on if I would watch the movie again...this one I would not BUT it is really just because it is too long with too many unneeded long scenes. I so wish it was edited better so I could be more into it.