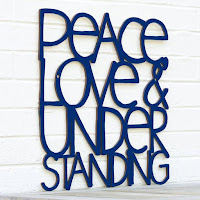 [Peace, Love, and Understanding] -- Some of you might know that I am an interfaith minister as well as an 80s music aficionado. In my capacity as the former, I am attending the Parliament of the World's Religions 2018 in Toronto, Canada. It started yesterday, and runs through to next Wednesday. In honor of the Parliament's commitment to cultivating harmony and peaceful dialog, I have chosen Elvis Costello & the Attractions version of "(What's So Funny 'Bout) Peace, Love, and Understanding" as this week's one and only Flashback tune. Originally a b-side for Costello's "American Squirm," it became a hit and was added to the band's US release of Armed Forces (1979).

If you are interested in the Peace Love & Understanding sign posted above, you can find it on Etsy.