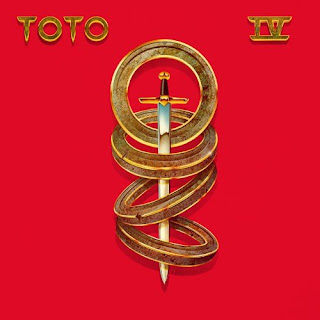 [TOTO-ly Platinum] -- The fourth studio album by session sidemen turned bandmates, Toto IV (1982) was a multiplatinum surprise. It might have even surprised Toto themselves, as their prior two records had a marked sales slump compared to their eponymous debut of 1978. Toto IV's lead single climbed to #2 and stayed there for several weeks while the third single became the bands first and only #1 Billboard hit. Even the fourth single, released almost a year after the first single, peaked in the top 10. Ultimately, four of the album's five singles were top 40 hits and the album itself secured the #11 position on the US Billboard 200. This is one of those records that successfully crosses -- or, perhaps, blurs -- the lines between AOR and jazz. So much so, that it's one of the few rock records that my father purchased in the 80s. We listened to it together quite a bit, and he delighted in pointing out just how meticulous the arrangements on this album really are. I still own his vinyl copy. Now, if you're wondering which tracks hit those #2, #10, and #1 slots respectively, you can read and hear more after the jump.

"Rosanna" was the lead single off Toto IV in April of 1982. It peaked at #2 on the Billboard Hot 100, but also snagged Grammy nominations for Record of the Year and Song of the Year, winning the former award at the 1983 presentations. The song isn't really about Rosanna Arquette, but her dating Steve Porcaro, the band's keyboard player, fueled that rumor for some time.

Flashback #2: "Time can erase the love we shared | But it gives me time to realize just how much you cared."

The ballad "I Won't Hold You Back" was the fourth single released off Toto IV. Debuting on the charts in March 1983, this song peaked at #10 in the US on May 7, 1983. It was also a top 40 hit in the UK. And, of course, it was featured heavily during slow dances at just about every spring formal across the US that year. OK, I don't know that last bit for certain, but it's a pretty good guess on my part.

Flashback #3: "I bless the rains down in Africa."

You probably knew that "Africa" was a #1 hit, right? In the US, anyway. So, yes, this third single from Toto IV hit the charts in May of 1982 and made a steady, unrelenting climb to the top of the Billboard Hot 100, securing the #1 position on February 5, 1983. That same month, it peaked at #3 in the UK. My favorite explanation of the song has to be Jeff Porcaro's who said [via an archived copy of toto99.com], "A white boy is trying to write a song on Africa, but since he's never been there, he can only tell what he's seen on TV or remembers in the past." The song remains popular, as two recent covers can attest: one by Weezer (with Weird Al!) and the other a heavy metal effort by Leo Moracchioli.