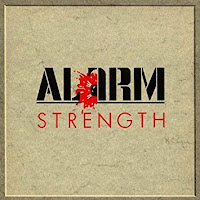 [Strength] -- In October of 1985, the Alarm released their second studio album, Strength. Where their first album, Declaration (1984), had been rough and rambunctious, Strength was more polished ... but still rambunctious. And music critic Stephen Thomas Erlewine of AllMusic.com considers Strength to be the Alarm's single best album. It's probably my favorite of their releases. Doesn't matter if we're talking about the original album tracks, the remixes, or an incidental acoustic version, I love the songs on this album. Songwriter and lead singer Mike Peters was in rare form for this one, folks.

Flashback #1: "You may be innocent or partly to blame | You may just be afraid in this power mad age."

"Absolute Reality" hit the UK airwaves in February of 1985. Yeah, it was several months ahead of the album it appeared on, but it was released to generate buzz for the band's upcoming May 1985 tour dates in the UK. "Absolute Reality" quickly reached the Top 40. Whether you listen to the standard album version, or the live acoustic one (linked above), this song is a meditation on the nature of reality -- political, social, etc.

The second single, "Strength," was released October 1, 1985, also in advance of the album. Took about a week for the tune to break into the Top 40. I have always found "Strength" to be both inspiring and humbling, a dichotomy that reflects the nature of soul and flesh. When it comes to this single, you can go with the album version or the eight and a half minute remix. I suggest trying the original version embedded below before checking out the long remix. I mean, how else would you know what was changed for the remix?

Flashback #3: "I still believe a man can change his own destiny | But the price is high that has got to be paid."

Desparation. Nostalgia. Passion. All three are in "Spirit of 76," a tale of a man and his friends who dreamt of bright lights only to be brought down low. "Somewhere tonight out on the street" indeed.