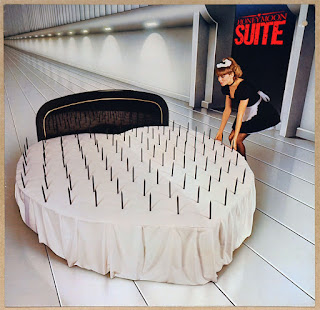 [Honeymoon Suite] -- In June of 1984, Canadian glam metal band Honeymoon Suite released their eponymous debut album. At the time of this Warner Bros. Records release, the band was about three years old but only one original member remained. Their first single, "New Girl Now," was all over MTV and the radio in the mid-80s. And they might have been relegated to one-hit-wonder status in the States if it wasn't for a pair of hits on their sophomore release. They remain somewhat popular in their native Canada to this day, but they haven't had a hit single in the US since 1988. But, oh, what hits they had with this 1984 debut. To revisit them, just read and hear more after the jump.

The music video for Honeymoon Suite's debut single, "New Girl Now," hasn't aged too well, but I think the song still sounds fresh. Which is a pretty fair feat for a song that peaked at #23 in Canada and #56 in the US back in 1984.

The second single off Honeymoon Suite was "Burning in Love." It didn't chart in the US, but it was a top 100 song in its native Canada. And while I like the music and melody line of this song, lyrically it kind of borders on being a creep-fest.

"Stay in the Light" was the third single released off Honeymoon Suite. It hit Canadian airwaves in February 1985. It peaked at #44 in Canada, but failed to chart in the US. It has a nice beat, decent guitar, and some airy keyboard work. If there's a story or deeper meaning here, I confess that I'm still missing it after all these years. But I still like to bob my head to it as I sing along.