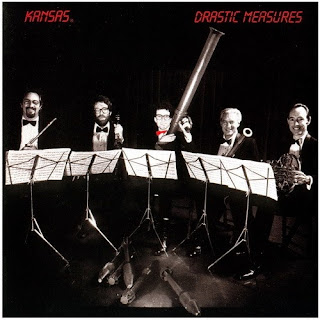 [A Different Kind of Kansas] -- Drastic Measures (1983) was Kansas' ninth studio album ... and seemingly the last gasp for a once mighty prog rock outfit. Of course, by this time, they had dropped any semblance of prog elements and were pretty much a mainstream rock band. Gone was the violin as well as the stately arpeggios and shimmering organ runs that had adorned previous efforts. And that's funny considering that the record was criticized for being too repetitive of those prior efforts. Maybe the detractors noticed the slick production that was still a hallmark of the Kansas recording method. But even though Drastic Measures was the band's lowest-charting record since their 1974 debut, and Kansas officially disbanded after the conclusion of the 1983 tour (don't worry, a new lineup rose from these ashes three years later), I still love this record. I might even still have the cassette copy I received as a birthday gift 30+ years ago. So, which tracks do I still sing along with these days? Read and hear more after the jump to find out!

Kansas is best known for songs with epic content and sweeping violin. Songs like "Carry On Wayward Son," "Dust in the Wind," and "Hold On." But a new lead singer and a shift in direction in 1983 yielded "Everybody's My Friend," a sonic meditation on fame and fortune.

"Fight Fire with Fire" was Drastic Measure's first and somewhat successful single. It peaked at #58 on the US Billboard Hot 100, and even hit #3 on US Top Tracks. And it's definitely one of those seemingly unfocused anthems that were so plentiful in the 80s. I mean, seriously, I can feel the passion, but I don't know what he's fired up to fight. Maybe it's just the passage of time.

Flashback #3: "It's all too real, all these things we feel | As the years go by, things intensify."

"Incident on a Bridge" was the b-side released with "Fight Fire with Fire." It's also one of the few songs on this album that continues the Kansas trend of spiritually motivated songwriting. It never charted, but melodically and musically, it's a strong effort.