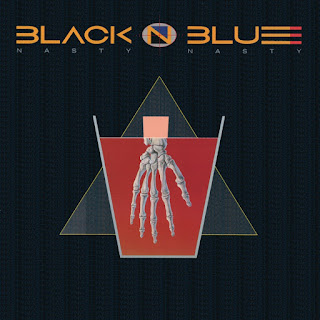 [Black N Blue] -- The 80s spawned a very strange creature: The Hair Metal genre (also called Glam Metal). I've previously written that this genre was possibly the result of controlled efforts to crossbreed Heavy Metal (for its energy and intensity) with Pop Rock (for its relative safety and accessibility). And it was responsible for a boat load of record sales in the 80s. In August 1986, one of those records was Nasty Nasty, the third studio release by Black N Blue. This record is spirited. It's aggressive. And ... it's not for everyone. I have to throw that "not for everyone" caveat out there just in case I'm the only one who still relies in an inner 13-year-old to rate hard rock from this period. Oh! And here's an interesting note: KISS bassist Gene Simmons produced this album. Anyway, Nasty Nasty didn't make a dent. And there was only one single, but it didn't really chart. In fact, I'm pretty sure it quickly ended up in the discount bin. And, yet, I still have mad love for this album. Then as well as now. So, what tracks have I chosen to share with you? Read and hear more after the break.

Flashback #1: "Her flesh and blood is what my dreams are made of."

I'm fairly certain "Does She Or Doesn't She" is the kind of song parents were worried about in the 80s.

Power ballads. Odes to friendship. Definitely in the wheelhouse of 80s Hair Metal bands. And, in the case of "I'll Be There For You," it's one of the few actual music videos Black N Blue did for this album.

Flashback #3: "We never asked for you and all your rules."

What's the one thing Hair Metal did really well in the 80s? I mean, aside from power ballads. Yep, anthems! Particularly anthems about raising a big old middle finger to anyone making too many "Rules."