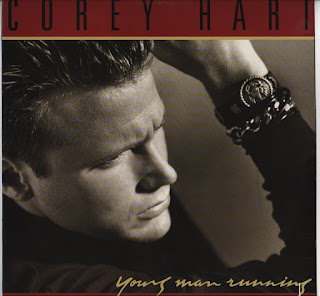 [When Corey was a Young Man Running] -- You know Corey Hart as the guy who wears his "Sunglasses at Night." And you know he's a man who'll "Never Surrender." But do you know what he did after those seminal 80s songs? Did you know he released three more 80s albums (counting his 1990 release). Well, yes, there was life for Mr. Hart even after the U.S. record buying public dropped him like shiny new day on the day after Christmas. In fact, in his native Canada, he remained a top 40 artist more or less through the late 90s. His 1986 release, Fields of Fire, earned him several nods at the 1987 Juno Awards. And this week in 1988, Hart released his fourth studio album, Young Man Running. Although you might never have heard of it, this record featured some of Hart's most mature songwriting to date. The record did chart in the US, and it spawned a top 40 single, it quickly faded and is all but forgotten here, with no other singles charting. But in Canada, the first three singles hit the top 40, with the first one even peaking at #2. It's a pleasant album featuring a variety of genres. So, if you'd like a taste of it, and I recommend that you do, you can read and hear more after the jump.

Flashback #1: "Someone will drag you down | And try to knock you under | Hey mama said with her words of wonder | Don't matter cause, cause it's in your soul."

British soul singer, Ruby Turner, joined Corey Hart for his first single off Young Man Running, "In Your Soul." It was #2 in Canada and #38 in the U.S. And if this is your first time hearing it, you might be surprised that it never earned a spot on a film or TV soundtrack. It just has that kind of vibe, you know?

Flashback #2: "You wear my trench coat in the rain and disappear."

Seems to me that there's something akin to a blues song almost fighting to make its way out of this late 80s pop song. And I dig that about "Don't Take Me to the Racetrack." As far as I can tell, this was not a single, but I have seen some album and cassette covers promoting this song. So it has earned a spot in this week's Flashback.

Flashback #3: "Sometimes I wish the sky would gently | Guide its arm towards me."

The third single off Young Man Running was "Truth Will Set You Free." This almost-anthemic song was pretty much written for three of his friends who were struggling with their sexuality during the late 80s. Up until very recently, that would have been referred to as a much less tolerant time for gays and lesbians, let alone the rest of the LGBTQ+ crowd. And this obscure 80s song might have remained on the dustheap of music history if not for a letter he received in October of 2011. That letter moved him to re-released (and remix) this song as a non-album single, "Truth Will Set U Free" (1Love featuring Corey Hart), in 2012. That version is a bit more upbeat and danceable, but here is the original version that was released in 1989 and that reached #39 in Canada. And it rounds out this week's Flashback offerings.