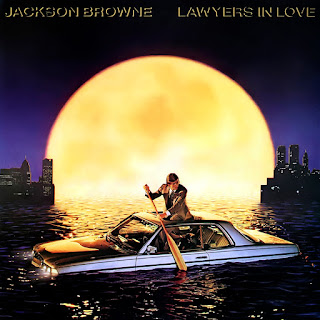 [Lawyers Need Love Too] -- 35 years ago this week, Jackson Browne released his seventh studio album, the humorously titled Lawyers In Love (1983). Despite its trio of successful singles, Lawyers In Love did not fare all that well with critics, although the Rolling Stone review was a notable, positive exception. Looking back, I would have thought that Browne's non-album single, "Somebody's Baby," released one year prior, might have helped pave the way for this 1983 album. But, maybe I'm trying to impose my own misconceptions about the music industry. Anyway,  the first single off this album was the title track, and when I first heard it cut across the airwaves I could not believe it. Up to this point in his career, Browne wasn't necessarily known for humor in his songwriting. But his lyrical jabs here mark a subtle shift from the personal to more political context.

Lawyers in Love, the album, spawned four hit singles from its eight tracks. It was a short album, even by 1980s standards. So, which three tracks have I selected to share with you this weekend? If you'd like to know, then I invite you to read and hear more after the break.

Flashback #1: "And I hear the U.S.S.R. will be open soon | As vacation land for lawyers in love."

As I mentioned in the intro to this week's post, Jackson Browne had not really been noted as a humorous songwriter. Or political. But here was was crooning about "Waiting for World War III while Jesus slaves | To the mating calls of lawyers in love." In the confines of what might seem like just a throwaway, silly theme, Browne was taking potshots at corporatism and the US/USSR relationship, all in one neat and tidy pop song. It peaked at #13 on the Billboard Hot 100, and its video has long remained a favorite of mine.

Flashback #2: "Tender is the night | And the benediction of the neon light."

"Tender is the Night" is more the kind of song we associate with Jackson Browne. It is deliberate, thoughtful, and almost a meditation on love and love gone wrong. While it never quite becomes plodding, it does kind of march steadily along. And it marched all the way to #79, #18, and #24 on the US Billboard Hot 100, US Mainstream Rock Tracks, and the US Adult Contemporary charts respectively. Looking back on the music video which features actress Daryl Hannah is somewhat bittersweet, and maybe even unsettling, given the allegations of domestic abuse that surfaced. Still, this song is about as poignant and lovely as 80s radio can get.

Flashback #3: "Don't want to argue, I don't want to fight | But there will definitely be a party tonight."

I don't quite remember "For a Rocker," Browne's third single off Lawyers in Love. But it is so upbeat and infective that I had to include it in this week's playlist. It didn't quite crack the top 40, peaking merely at #45 on the Billboard Hot 100, but it is a great example of a crowd pleaser. According to Wikipedia, Browne used it as a concert closer for years. So it is probably fitting that we use video of a live performance here. Is he channeling his inner Springstreen? Struggling against the discomfit of his lyrical growth evidenced elsewhere on this album? Or maybe, just maybe, he needed to blow off some steam.