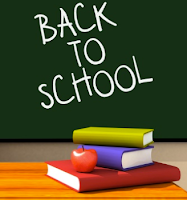 [School Daze] -- Have you noticed a disturbing trend on Facebook over the past week or so? I'm not talking about storms or politics. I'm talking about the fact that parents are posting "1st day of school" photos! Now, I was initially confused because I thought the kids had recently just been let out of school for the Summer. Fortunately, the confusion was lessened slightly because July's back-to-school sales had already taken me well off guard. But, of course, Summer ends with this weekend's Labor Day holiday. People are already dreaming of pumpkin-spice everything, and even champing at the bit for sweater weather. So, how about we observe this not quite subtle schedule shift with some 80s songs about school? If you like that plan, you can read and hear more right after the jump.

Flashback #1: "Hold on baby now here we go back to school."

Rodney Dangerfield (1921 - 2004) made a comedic career out of claiming, "I don't get no respect!" He started it in his standup routines, and he continued playing the beleaguered everyman in his movies. But there was one flick in which he played a wealthy and successful businessman: Back to School (1986). Side note: This movie includes an early Robert Downey Jr. playing something of a trope of a college weirdo who sometimes has blue hair. Anyway, Rodney's character, Thornton Melon, agrees to enter college himself just to prevent his only son, Jason, from dropping out. Thornton doesn't have a high school diploma or any kind of paperwork to prove his qualifications. But he is able to wrangle admission by dropping big bucks and opening the Thornton Melon School of Business. After that, hilarity -- and more than a few heartfelt lessons -- ensue. Jude Cole, whom you probably never heard of but who is a successful songwriter and creative businessman, performs the movie's title track, "Back to School."

Flashback #2: "Be cruel to your school | 'cause you may never get another."

A team-up between Twisted Sister, glam/horror icons of the 80s, and Alice Cooper, the glam/horror icon of the 70s, could only mean one thing: a revival of 60s pop! Oh, and zombies. (And I bet you thought that was a modern fad, didn't you? Aside from its memorable music video, "Be Chrool to Your Scuel" is probably best known for the duet between Dee Snider and Alice Cooper. However, the song also featured Brian Setzer (Stray Cats) on lead guitar, Billy Joel on the piano, and Clarence Clemmons on saxophone. This song, and Twisted Sister's cover of "Leader of the Pack," can be found on the band's fourth studio album, Come Out and Play (1985). I still have this on vinyl, and I still find the openable manhole cover to be very amusing.


Fun fact: The music video for "Be Chrool to Your Scuel" kind of follows in the slapsticky, us-against-school theme of Twisted Sister's prior videos. However, this one was banned by MTV on the grounds of being too offensive. Ah, that lovely old 80s naiveté.

Cheesy tuxes, gratuitous bikini and miniskirted models parading (er, masquerading) as teachers, and dead-on casting of school-age doppelgängers for the mighty Van Halen? Must be the fourth and final single from Van Halen's 1984, "Hot for Teacher." Do I really need to say more about this song? OK, fine. "Hot for Teacher" was the final single released by Van Halen's original lineup. It peaked at #56 on the US Billboard Hot 100.

I hope you enjoyed those tunes. Let me know in the comments or on Twitter. Also, I'd love to hear your favorite back-to-school memory!

Before I go, I must remind you that the rule of three applies when doing Flashbacks. As I've made my three offerings, that's all till next week. Dedicated 80s-philes can find more flashbacks in the Prophet or Madman archives or via Bookended's 80s Flashback tag. As always, your comments are welcome on today's, or any other, flashback post. And if you like what I'm doing here, please share the link with your friends. If, however, you don't like the flashback, feel free to share it with your enemies.