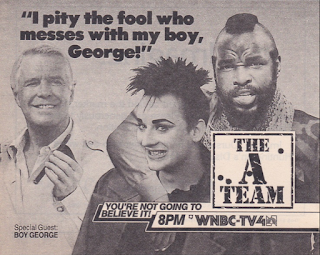 [Cowboy George] -- The other day, "Do You Really Want to Hurt Me?" by Culture Club was playing in the office cafeteria. It was still wafting through the speakers as I walked up to pay for my lunch. The cashier, who had been singing along with Boy George, told me, "I want to karaoke with him."

And that launched a brief exchange in which we finally uncovered that she wanted to do Carpool Karaoke with James Corden. With that sorted, I told her, "All I could think of was that time Culture Club appeared on an episode of The A-Team." Well, it was quickly obvious that neither the cashier nor anyone else in line remembered that particular cameo. The cashier was shocked: "No! The show with George Peppard? For real?" Yes, for real. This pop culture gem was "Cowboy George" (Season 4, Episode 16) with an air date of February 11, 1986, according to IMDb.


Now, I won't go through a recap. If you're interested in that, you can find a great one here. No, I'm going to delve into some music, of course. Can you guess which Culture Club tunes made the cut this week? Well, read and hear more after the jump.

"Do You Really Want to Hurt Me" was Culture Club's first #1 hit in the UK and a top 10 hit in the US as well. It appears on their debut album, Kissing to Be Clever (1982), which has sold millions of copies all over the world. This song does not appear in the "Cowboy George" episode of The A-Team, but it's the one that made me think of that episode and therefore gave me the idea to feature the band in this week's Flashback.

Boy George and Culture Club didn't do a cameo on the A-Team just to swap jokes and kick in doors. They also came to play (or, at least pretend to do so)! The "Cowboy George" episode featured three Culture Club tunes. Two of them -- "God Thank You Woman" and "Move Out" -- were played during the A-Team's battle with that week's collection of baddies. If you want the original music video for "God Thank You Woman," check it out here. Otherwise, enjoy this, um, performance as it appeared in the episode (complete with the standard fights).

Flashback #3: "Loving would be easy if your colors were like my dreams."

Of course, Boy George wins over the heard-headed clientele of the roadhouse even as the A-Team wins the day. So, what do you do for an encore? Why, play your best-selling hit, "Karma Chameleon," of course!