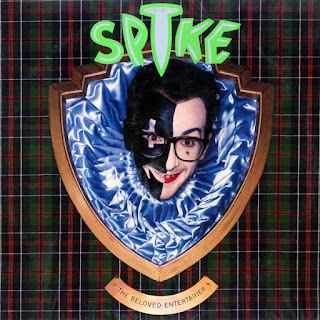 [Spike] -- After yet another brief hiatus, brought to you by my day job and multiple side gigs, I'm back to the blogging of 80s tunes. And what a post I have for you this weekend! Most people remember Elvis Costello's 12th studio album for the top 20 single, "Veronica," which he co-wrote with Paul McCartney. That is, if they recall the album at all. But Spike (1989) features a wealth of fabulous tracks ranging from sombre to spitfire, and it's a personal favorite. Spike was released 28 years ago this week (2/6/1989 in the UK and 2/7/1989 in the US), and it reached the #5 and #32 positions on the UK album chart and the Billboard 200 respectively. From its cover art featuring Costello's own head as the stuffed and mounted head of "The Beloved Entertainer," you knew you were in for something a bit different than his past efforts. Spike was also Costello's first album for his then new label, Warner Brothers. He started writing for it in 1987. And, as WB had provided him with a huge budget, Costello decided to use the blueprints he had in mind for five different albums. Maybe that's why this record weighs in with a whopping 15 total tracks. Now, I've already linked the album's highest charting single, so which of the remaining 14 tracks will I highlight? Well, to find that out, you can read and hear more after the jump.

Flashback #1: "One day you're going to have to face | A deep dark truthful mirror."

The third track on the CD, "Deep Dark Truthful Mirror" features a guest appearance by the Dirty Dozen Brass Band. And they provide just the right tenor for a song wrought with the implications -- or, at least, the perceived or feared implications, of truly looking at your darker reflection. This is a soulful and wrenching track, yet it's also deeply moving.

Flashback #2: "That's when they finally put you in the ground | I'll stand on your grave and tramp the dirt down."

Given today's political environment, it might be hard to imagine or remember that 80s politicians also stirred up anger and resentment. And across the pond, the UK had their own target of revile in a Prime Minister Margaret Thatcher. She inspired, if that's the correct word, a number of protest songs, but my favorite of the bunch is "Tramp the Dirt Down" by Elvis Costello. And, as recently as 2013, Costello has gone on record defending his decision to continue singing his anti-Thatcher song even after her death.

Flashback #3: "Bentley had surrendered, he was under arrest | When he gave Chris Craig that fatal request."

In popular culture, it's not difficult to find songs that glorify violence or decry it. It is difficult, I however, to find a more lyrical protest against the death penalty than Costello's "Let Him Dangle." It tells the story of a 19-year-old man who was hanged in England in 1953 for the murder of a policeman. There were glaring errors in the case, and people rioted on both sides of the issue. In the liner notes to the Rhino re-issue of Spike (1989/2001), Costello explained that "the case of Derek Bentley had been brought up in every capital punishment debate since I had been a child, so I put it in a song."

Flashback #4 (Bonus!): "She pads, pads around the bedroom, practicing ways to flirt | He paws, pours another drink and anything in a skirt."

I've been away for a few weeks, and the last two songs in this post were on the darker side, so here's a more upbeat bonus track to end this week's Flashback. "Pads, Paws, and Claws."

I've made my offerings, so that's all till next week. Dedicated 80s-philes can find more flashbacks in the Prophet or Madman archives or via Bookended's 80s Flashback tag. As always, your comments are welcome on today's, or any other, flashback post. And if you like what I'm doing here, please share the link with your friends. If, however, you don't like the flashback, feel free to share it with your enemies.