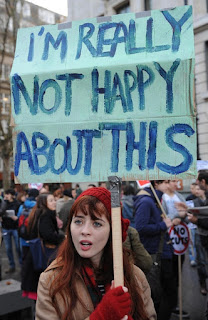 [Politics Schmolotics] -- After the November 2010 midterm election, I was looking for inspiration. Inspiration to help me write a Flashback post, and to help me move on from the election results. Now, I had heard arguments that all the best protest songs had been written and recorded in the 60s and 70s. That might be true, but I can assure you the 80s did not lack for politically charged passion or activist rhetoric. So, with this in mind, I assembled a politically minded set of Flashbacks tunes. Of course, your gut reaction to the word "protest" might very well be to add "against" after it. That's understandable. We're usually treated to, and entreated to engage in, protests against something. But you can also protest for something. You can use protest as a form of support for a cause. And the 80s tunes I highlighted back in 2010 still resonate for me in both regards of "protest," particularly in the wake of a rather vitriolic presidential election. Maybe even more so after a week of confirmation hearings for the most unqualified cabinet nominees ever assembled (not that qualifications guarantee success, but come on). Anyway, I'm still hopeful. Sure, I'm scared, too. Change is scary. There are people who are happy about this change, and there are people who are energized to fight what they perceive this change represents. Either way, if you want some 80s tunes that might help you through this transition, then read and hear more after the jump.

Flashback #1: ""Take your instinct by the reins | Your better best to rearrange | What we want and what we need | Has been confused, been confused."

What is one political topic of the 80s that is still a hot button issue today? No, the correct answer is not parachute pants. But "Jobs" or "the economy" are just two of many responses I would have accepted. In 1987, R.E.M. opened their fifth release, Document, with a call to not blindly follow the teeming, mindless throngs. It was, specifically, a protest against vapid consumerism -- you know, American-style consumerism that falsely drove this nation's economy while leading everyone and their twins into greater debt. Taking a cue from my introduction, this tune could also be considered a call to live more simply, to use money and resources more wisely. It was also, a great song to hear in concert (I saw R.E.M. perform live at Penn State's Recreation Hall). We may be far from our finest hour, but this is still the "Finest Worksong."

There are big and timeless issues that affect each generation in its own way. Most rock bands, however, simply don't deal with hunger, poverty, the environment, overseas wars, or who is sitting in the White House. No, most rock bands prefer to tap the rebellious zeitgeist of their audience and give voice to their feelings of being down-trodden, cast aside, or put upon. And what do most teenagers want? They want personal freedom, they want to be heard, and they don't want all your damn rules. The times may change, but those teenage feelings of anger and angst are timeless. You may say our 2nd Flashback of the day is cartoony, and the video certainly is, but I think it might just be the most accurate, most rousing protest song ever recorded. And before you disagree, think about this: In 1985, just one year after this song was released, Dee Snider went to Washington, DC, to speak up against censorship in rock music. (And, therefore, to speak in favor of artistic expression.) You could say he ...  just wasn't gonna take it.

Flashback #3: "And the bells take their toll once again in victory chime | And we can thank God that we've finally got | Peace in our time."

I'll bet your heart -- or your fist -- is pumping after that last Flashback. So lets cool things down a bit. In 1984, Elvis Costello sang wistfully of a future in which "we can thank God that we've finally got peace in our time." Every generation has asked if they will see peace in their time, and 30+ years after Costello sang our 3rd and final Flashback, we appear to be no closer to achieving that goal. However, as long as there are people willing to at least ask the question, I believe there remains hope that the Sun will rise on a more peaceful tomorrow.