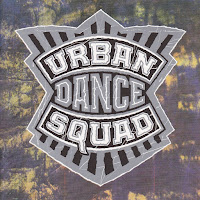 [Urban Dance Squad] -- For the end of February, we're going to revisit an album that came out in the final year of our favorite decade. Mental Floss for the Globe was the debut album by Urban Dance Squad, a rap rock band founded in Utrecht, Netherlands, in 1986. They recorded their debut in the middle of 1989 and released it eight months later in March of 1990. The album climbed to #54 on the Billboard 200 album chart, driven by their popular hit, "Deeper Shade of Soul," and a tour with Living Colour. I saw the Penn State show, which took place shortly after Desert Shield became Desert Storm. Urban Dance Squad was the opener, and I was fascinated with the lead singer's use of an old WWII field phone as a microphone. The three tracks for this week show a certain genius for melding rock, rap, soul, metal, etc. You can read and hear more about them after the break.

Flashback #1: "This is all about music how to use it, they call it songs | If a rapper doesn't sing, well they call it wrong."

If this is your first introduction to Urban Dance Squad's boundary-breaking mix of hip-hop and rock, you're in for a treat.

Flashback #2: "Where big shots make the bucks and call the shots and budge | The status to super, they hold the grudge."

The message of this angry yet eloquent diatribe about the pace of society and its "buy more" mentality seems like it could have been released today, not 27 years ago.

Flashback #3: "They call it rogue-rock, but it's a deeper shade of soul."

Urban Dance Squad's lone US hit is our final Flashback this week. "Deeper Shade of Soul" samples the 1968 Ray Barretto song, "A Deeper Shade of Soul." A song this smooth should have been a massive summer hit. And it did spend nearly 20 weeks on the Billboard Hot 100, peaking at #21. However, its failure to crack the top 10, or even achieve more than cult status, is practically criminal in my opinion.