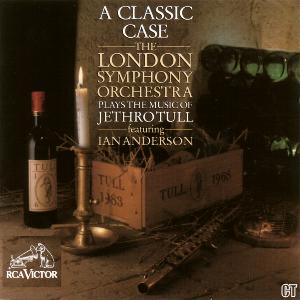 [A Classic Case] -- I'm doing something a bit different for the Flashback this weekend. I'm featuring an album of music from the 70s ... that was re-recorded and released in the 80s ... with the backing of a symphony orchestra. I'll bet you're intrigued now, right? Well, the band in question is Jethro Tull. In 1984, the Tull lineup of Ian Anderson (flute, vocals), Martin Barre (electric guitar), Dave Pegg (bass), Peter-John Vettese (keyboards), and Dave Burgess (drums) teamed with the London Symphony Orchestra. And you can read and hear more about this project after the break.

The Tull and orchestra pairing produced A Classic Case which was released 32 years ago this week. In the UK, that is. The album didn't reach the US until the end of 1985. David Palmer, who was known to have roots in both the rock and classical worlds, arranged the music and conducted the orchestra. Together, Tull and the orchestra recorded 13 songs at the CBS Studios in London. Four of the songs were joined together into a medley, so the resulting album had a total of 10 tracks:
Wait, have I been referring to this as a Jethro Tull record? It's not. Technically, Jethro Tull are the guest musicians on this release credited to the London Symphony Orchestra (did you know they have been around since 1904?). And although this project was envisioned as a set of orchestral arrangements of Tull songs, the addition of Tull members made the whole thing wind up as a rock band playing with an orchestra. Depending on the review you find, this is either interesting or a travesty. Dedicated classical music reviewers, and more than a few die-hard Jethro Tull sites, weigh in closer to the travesty end of the scale.

I, however, find it to be a rather enjoyable record. Some of the songs are almost tailor made for this treatment. "Bourée" seems a particularly good match, for example. Others, like "Aqualung" and "Too Old to Rock ’n’ Roll; Too Young to Die," sound good in almost any setting ... as long as the signature guitar licks are present, elevating the performance above mere elevator muzak.

That's all till next time. Dedicated 80s-philes can find more flashbacks in the Prophet or Madman archives or via Bookended's 80s Flashback tag. As always, your comments are welcome on today's, or any other, flashback post. And if you like what I'm doing here, please share the link with your friends. If, however, you don't like the flashback, feel free to share it with your enemies.