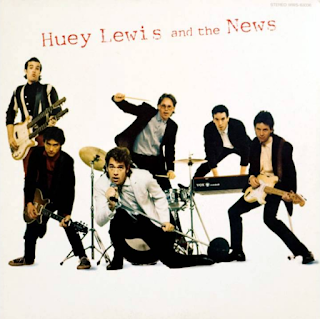 [Early Huey] -- Before Huey Lewis and the News had their breakout hit with "Do You Believe in Love" in 1982, they released their eponymous debut album in 1980. The band had actually signed their recording contract with Chrysalis Records as Huey Lewis and the American Express. However, due to the label's concerns about litigation by a certain credit card company, the band changed their name to Huey Lewis and the News prior to their first album's release. Their debut album had two singles, but neither of them charted. Nor did the album for that matter. Still, you can hear the combination of doo wop and 80s pop, and see the goodnatured slapsticky humor, that would become staples of the band's reputation through the mid to late 80s. And, yes, I admit: I have a serious soft spot for this album. Read and hear more about it after the break. Maybe you'll come to feel that Huey Lewis and the News is an underrated and unfortunately unappreciated album.

Flashback #1: "Because it's real the way you used to make me feel | It makes it so hard to say  | But nothing can change the way I feel today."

The first single off Huey Lewis and the News was "Some of My Lies Are True (Sooner or Later)." It's about people betraying other people, which is, of course, terrible. But the song's upbeat hook and the exuberant nature of the video belie the less-than-ideal subject matter. And I can't help but sing along with it when it comes up in my song rotation.

"Hearts" was never released as a single, and I think that's a mistake. Sure, it could be dismissed as just another song about all the things that go wrong in love and relationships. But when that chorus hits, it's a real kick. And how can you go wrong with a clap-along song that has real handclaps recorded in the mix?

"Now Here's You" was the second single off Huey Lewis and the News. And, like it's predecessor, it didn't even make a dint in the charts. If you ask me, it seems tailor-made for an 80s rom-com. Devil-may-care protagonist goes through hearts like playing cards ... until he meets the one woman that he didn't see coming. At that moment, well, "It's gotta be."