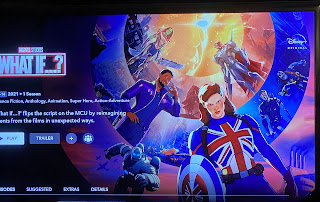 What If... they didn't create this series? Would we have missed anything? Are we more invested because of this series? What do we gain?

My answers to these questions don't actually influence if I liked the series or not because my responses would make you think I didn't like it but in fact I did. I think I liked it because it put more emphasis on the female characters and let them be in the forefront more than usual.

I loved seeing Peggy Carter as Captain Carter and would love if that became real somehow. Also Black Widow had a HUGE role and I had to laugh that they kept her changing looks from the movies in each episode of this series. I guess some things never change ;)

I definitely could have done without the zombie episode and honestly I couldn't even watch it when the zombies were one, just too gross for me. But I guess that is a tip of the hat to the animators. They were able to draw zombie so gross that I couldn't even look at them. The story though was very interesting and it did end up being a part of the bigger picture which from the beginning I didn't know about or expect.

I thought each episode was stand alone but I was wrong. Each one lead to a final episode where it all came together and resolved. I did love that each episode was 30 minutes or less, so we were able to binge the whole series in one evening. It also made it more like a comic book and you had to get in all your information in a short amount of time.

I do wish Scarlett Johannson had been able to do the Black Widow voice. Not that Lake Bell wasn't good but it was hard not to hear Poison Ivy from Harley Quinn in many scenes whenever Black Widow spoke.

Overall I recommend watching this series especially if you love Marvel and don't mind thinking outside the box for your characters. Will you miss out on anything if you don't watch it? I don't think so but I am glad I watched.