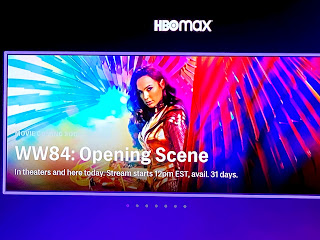 First viewing - I did not like the movie. Although I think some of it was because we didn't have closed captioning on and I missed a lot of dialogue thereby missing some of the movie context.

I did feel the first viewing was a little lacking and the movie was a bit over the top. But we watched it a second time during the watch along with Patty Jenkins and Gal Gadot WITH closed captioning and I liked the move much much more. It hit me differently too. I bought into the meaning and was very moved by it.

My biggest statement, though, I had during the two watches of the movie was "Why does a woman have to always give up everything?"

Even the villain man got his son back at the end. But Diana/Wonder Woman has to give up everything she has.

The movie is definitely eye candy and Gal Gadot as Wonder Woman will always make me happy. I had no issue with the Steve Trevor storyline overall and I liked how they made it work. Kristen Wiig as Cheetah was quite the casting choice and she blew me away. I always think that comedians make the best dramatic actors.

Be sure to stick around for the credit scene. It is brilliant perfection.

I definitely liked the first Wonder Woman better but I would watch this again (third times a charm) and probably will before our month of HBO Max is over - we signed up just to see Wonder Woman 1984.