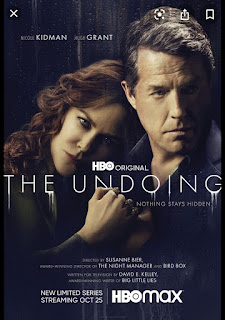 My mother actually stated this show as a 10 out of 10 for her and along with the story in Entertainment Weekly, and the cast of this show, I knew I wanted to watch it.

It is only 6 hour long episodes and oh my goodness the amount of story that happens in those 6 hours is a massive undertaking and one that David E Kelley can more than handle.

An incredible story told by the most wonderful cast: Nicole Kidman, Hugh Grant, Noah Jupe, Donald Sutherland, and Lily Rabe and a supporting cast of people I hope to see for a long time to come.

I can tell you nothing specific because you need to watch it for yourself and enjoy the ride. It is beautifully filmed and the costuming is luscious. Nicole Kidman is a force to watch and I believe there is nothing she can't do at this point. Hugh Grant had me needing to watch Notting Hill after the show so I could clear my brain of his character. Donald Sutherland was pure, intense, heartbreaking, demanding and one of the best roles I have seen him create. But the actor who stole the show for me was the young boy, Noah Jupe. Oh what a joy to watch this young man portray his character. The emotions he had to go through, it was impressive.

Bonus information: the singer of the opening credits song is none other than Nicole Kidman. Simply beautiful.