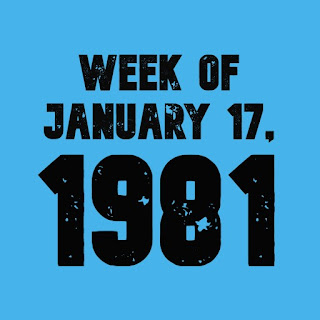 [This week in 1981] -- I know the past week has been rife with all sorts of emotions, most of them regarding specific events in Washington, DC. So, I wanted this week's Flashback to be a bit of an escape for all y'all. And what better way to escape today than by looking at what was on the charts 40 years ago this very week? (OK, there are plenty of other ways to distract yourself, and maybe some of them are better than this backward glance, but humor me, OK?). During the week that ended on January 17, 1981, Pope John Paul II met with Polish Solidarity leader Lech Wałęsa, Ferdinand Marcos lifted martial law in the Philippines, and a former Beatle was in the midst of a 12-week run at the top of the Billboard Hot 100. If you want to know what the top three songs were 40 years ago this week, read and hear more after the jump.

Flashback #1: "You battle on with the love you're livin' on."
Released in October 1980, "Guilty" was the title track of, and second single from, Barbra Streisand's 22nd studio album. This duet with Barry Gibb of the Bee Gees peaked at #3 on the US Billboard Hot 100, as well as #5 on the Adult Contemporary Chart. It was also certified Gold and won a Grammy Award. At this point in 1981, "Guilty" was enjoying its second consecutive week in the #3 position. It would drop to #4 in the following week. All told, it spent a total of 12 weeks on the Billboard Hot 100, starting at #68 in the week of November 1, 1980.
Flashback #2: "Love on the rocks | Ain't no big surprise | Just pour me a drink | And I'll tell you my lies."
Neil Diamond's "Love on the Rocks" was in the #2 position this week 40 years ago, a position it held for three weeks. Like "Guilty," "Love on the Rocks" was released in October 1980, but it didn't reach its chart peak until January 1981. Diamond performed this song in the 1980 movie The Jazz Singer as well as the soundtrack album to the film. I enjoyed both the film and the soundtrack, I recall sharing the vinyl LP with my sister. But I was always confused about the title -- all the music was more like soft rock or easy listening rather than jazz. I later learned the 1980 film was yet another adaptation of a 1925 play of the same name, but the 1980 version sets the lead character as a singer who is torn between his family's tradition (Jewish cantor performing at the synagogue) and pursuing his dreams as a pop singer. The film was a critical disappointment, but the album was a huge success.
Flashback #3: "It's been too long since we took the time | No one's to blame, I know time flies so quickly."
Which brings us to the #1 song this week in 1981: "(Just Like) Starting Over" by John Lennon. It was the first single off John Lennon and Yoko Ono's fifth studio album, Double Fantasy (1980). "(Just Like) Starting Over" was released on October 23, 1980, and it entered the Billboard Hot 100 at #38 the week of November 1. All told, "(Just Like) Starting Over" spent 12 weeks on the Hot 100, reaching the #1 position in the US, and in the UK, three weeks after Lennon was murdered on December 8, 1980. According to Wikipedia, Billboard Magazine ranked "(Just Like) Starting Over" as the Billboard Hot 100's 62nd biggest song of all time (Note 4, August 2013).
Once again, I remind you that the rule of three applies when doing Flashbacks. As I've made my three offerings, that's all till next week. Dedicated 80s-philes can find more flashbacks in the Prophet or Madman archives or via Bookended's 80s Flashback tag. As always, your comments are welcome on today's, or any other, flashback post. And if you like what I'm doing here, please share the link with your friends. If, however, you don't like the flashback, feel free to share it with your enemies.
I'll see you in seven!
Posted by Brainwise at 1/15/2021 06:37:00 PM