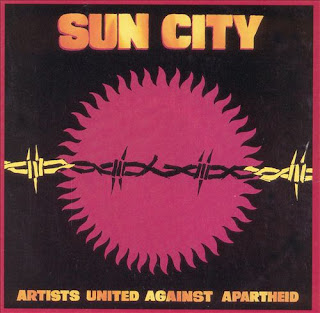 [Sun City] -- In December 1985, Steven Van Zandt and Artists United Against Apartheid released "the most political of all of the charity rock albums of the 1980s" (per AllMusic). I wrote about it on the record's 30th anniversary, and revisited it in September 2017. And in the wake of the past 24-48 hours, I think now is a good time to revisit it once again. At any rate, it's a fair reminder of how far we've come ... and how much further we still have to go ... as a society.

That record was Sun City (1985), a protest album driven by Van Zandt (perhaps best known for his affiliation with  Bruce Springsteen's E Street Band) in partnership with Artists United Against Apartheid. The name pretty much tells you what the they were all about. They recorded two versions of the song, "Sun City," and other material for this album. The personnel assembled by Van Zandt reads like a who's who of popular and critically acclaimed artists of the mid-80s. For example:

Sun City didn't achieve great commercial success, but it did peak at #31 on the Billboard 200 pop albums chart. It did, however, receive critical acclaim in abundance, reaching #5 on the Pazz & Jop Critics Poll (yes, that's really the name) for albums for that year. What tracks will we highlight this week? Read and hear more after the jump!

Flashback #1: "Meanwhile people are dying | And giving up hope | This quiet diplomacy | Ain't nothing but a joke."

Written by Steven Van Zandt and performed by Artists United Against Apartheid, "Sun City" is a powerful protest song. It brings rockers and rappers together, channeling anger and frustration into an amazing 80s tune. Sort of a "We Are The World," but with teeth ... and a little funk.

The artists in Artists United Against Apartheid weren't limited to rock or rap. Jazz artists  Miles Davis, Stanley Jordan, Herbie Hancock, Sonny Okosuns, Ron Carter, Tony Williams, and Richard Scher joined forces for the "The Struggle Continues." This is incredible because Hancock, Carter, and Williams are three of the four musicians who were part of the 2nd version of the Miles Davis Quintet (the "Second Great Quintet" of 1964 to 1969) with the added bonus of a guitar solo by Stanley Jordan.

Flashback #3: "First time I heard there was trouble in the Middle East, I thought they were talking about Pittsburgh."

Is there a topic more likely to enrage both the left and the right than that of identification? It could be about physical ID cards (for purchasing guns or even voting). Or it could be about gender or race identification and politics. In 1985's "Let Me See Your I.D.," hip-hop luminaries like Mele-Mel, Scorpio from GM Flash, Kurtis Blow, and the Fat Boys joined Gil Scott-Heron for a commentary on the issue of identity papers in South Africa. However, there are chilling parallels to what minorities are still experiencing here today in the U.S.