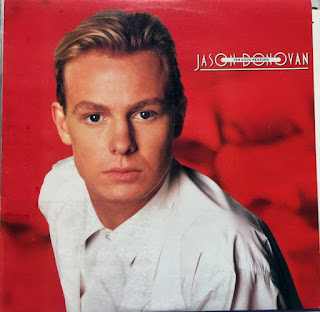 [Give Me Ten Good Reasons] -- Already a soap star in his native Australia, Jason Donovan embarked on a music career when his first single, "Nothing Can Divide Us," dropped in 1988. Donovan's subsequent debut album, Ten Good Reasons, dropped in May 1989. It was the biggest selling album in the UK that year, and it did pretty well in other European countries. It also peaked at #5 in Canada. It did not chart in the US. In the UK, the album yielded two #1 singles, making Donovan the first Australian male to simultaneously hold both a single and an album in #1 positions. Do you remember him? Do you have a favorite from his debut album? Can you guess which tracks I'll feature this week? There's more after the jump!

Flashback #1: "You give me one good reason to leave me  | I'll give you ten good reasons to stay."

"Too Many Broken Hearts" -- The third single released off Donovan's debut album, and it became the first of his two #1 hits!

Flashback #2: "I'll see you in the sunlight | I'll hear your voice everywhere | I'll run to tenderly hold you |  But darling you won't be there."

Donovan's second #1 hit was the fourth single off Ten Good Reasons -- "Sealed with a Kiss." Maybe it's just me, but this music video makes the song seem like it's off of the soundtrack from an obscure 80s movie that you swear you saw but cannot actually remember.

Flashback #3: "No more dreaming about tomorrow  | Forget the loneliness and the sorrow | I've got to say | It's all because of you."

"Especially for You," a duet with Kylie Minogue, was apparently released as a Christmas single in 1988. And it appeared as the 11th track on Donovan's debut album.