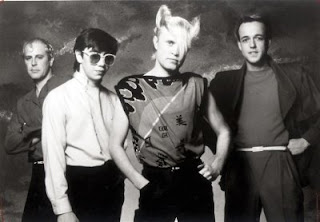 [Under-appreciated Seagulls] -- I missed a few weekends of Flashbacks. OK, so it was almost the entirety of June. But I'm back to finish June 2019 strong. And I'm doing so with A Flock of Seagulls. You remember A Flock of Seagulls, right? They were a UK synthpop band founded by two hairdressers (look at the image above and guess which guys had that gig). Now, if you're at all familiar with the Flock, then you know their big hits. So, this weekend, I'm going to feature a few of their more under-the-radar cuts. Ready to find out what's on the playlist this week? Read and hear more after the jump!

Flashback #1: "Trying to transfer affection | Is starting to tear me apart."

"Transfer Affection" is one of my favorite songs by A Flock of Seagulls. It comes from their second LP, Listen (1983), which spawned the international hit, "Wishing (If I Had a Photograph of You)." That song breached the UK Top 10, the US Billboard Hot 100, and several other markets. "Transfer Affection," however, was never released as a single. If I recall correctly, it wasn't even a b-side. But why should that prevent me from featuring it here? It won't. I feel I am doing you a service by guiding you to a lesser known song that should have received its fair share of mainstream radio play. Enjoy!

The second track on side A of their self-titled debut, "Messages" was never released as a single. But the band certainly played it live, as this video indicates. I don't think there is any real message in "Messages," but it's a damn fun track.

Flashback #3: "You can make a hell | Out of this paradise | With your heart of steel."

The Story of a Young Heart (1984) was A Flock of Seagulls' third and final album to feature the original quartet. It's definitely different from their first two records, and "Heart of Steel" might be the closest a new romantics act ever came to a honkey tonk bar ballad. Or at least a blues bar ballad. At least in my opinion.