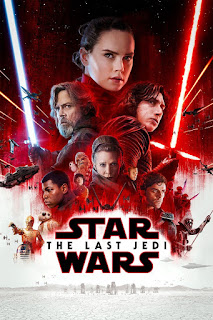 We finally got around to watching The Last Jedi.

I did not like the first half of the movie. It was hokey, long and disjointed. I felt like Mark Hamill was almost making fun of himself and it was distracting.

But once the second half started I was in it. I was completely engulfed in the story and wanting to know what was going to happen.

Simply put for me and this set of Star Wars movies is...I love Rey. I love Daisy Ridley as Rey. I love this character sooo much. I think Daisy portrays her perfectly and I could just watch a movie with just her and none of the others... well maybe BB8 ;)

I didn’t get the whole Emo Kylo Ren since I pretty much felt like he was just as he was previously. I was excited when Rey and he were working together and I wish he had changed but alas no. I LOVED him taking out Snoke and I did like the trickery with Laura Dern’s character and you thought she was one way but she wasn’t.

I did also love the comedy of the “nuns” on the island and I think the Porgs are adorable.

I want to watch this again already because I am pretty sure I missed some things but overall I give this 1 paw for the first half and 3 paws for the second half.
Posted by Dangrdafne at 6/11/2019 10:38:00 PM