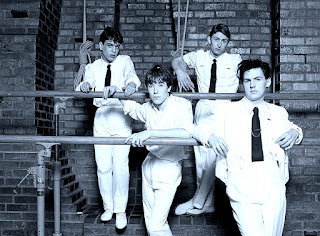 [RIP Mark Hollis] -- This week we lost Talk Talk co-founder and enigmatic pop singer, Mark Hollis (1/4/1955 – 2/25/2019). Hollis was Talk Talk's primary songwriter and lead singer. Under his direction, the band moved from its New Romantic and synth pop origins in 1981 to increasingly more experimental outings in their 10-year history. Compare the pop stylings of The Party's Over (1982) with the art rock of, for example, Spirit of Eden (1988). After five studio albums and 23 singles, Talk Talk disbanded in 1992. Hollis recorded and released one self-titled solo album in 1998, but retired from music, and largely disappeared from public life, shortly thereafter. His death this week came "after a short illness from which he never recovered."

To commemorate Hollis' death, I'm taking a cue from Gordon Skene's site, Past Daily, and sharing the audio of Talk Talk's Hammersmith Odeon appearance from May 8, 1986, as broadcast by the BBC: