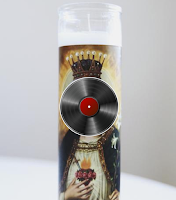 [In the Spirit] -- Last weekend I attended a retreat as a member of the staff of the School of Sacred Ministries. In my preparations for that retreat, I found myself with no time to post a Flashback. Before I go on, let me discuss the retreat topic. For that retreat, students of the School of Sacred Ministries focused on their "Religions of Origin." The idea being that, whether we are still part of the tradition we were raised in, it has had and continues to have an impact on us, upon our psyche. That impact can be positive or negative, and is often both. And you need to examine the impact and own it. Then and only then can you move on, taking what you need from the past and discarding the rest. So, this weekend, I present some songs inspired by last week's retreat. These tunes have religious and spiritual themes to them. What those themes are might be obvious in some cases, and hidden in others. I'll try not to spend too much time in spelling any of them out. Like with most art, interpretation should be left up to the observer. Or, in this case, the listener (and music video viewer). If you're curious as to what tracks spirited their way onto my latest playlist, read and hear more after the jump.

Flashback #1: "In the midnight hour I can feel your power | Just like a prayer you know I'll take you there."

"Like a Prayer" was the lead single and title track off Madonna's fourth studio album. Released in March of 1989, the song went on to top charts all over the world. In the US alone, it peaked at #1 on the US Billboard Hot 100 and the  the US Dance Club Songs (Billboard) charts, and #3 on the US Adult Contemporary (Billboard) and #20 on the US Hot R&B/Hip-Hop Songs (Billboard) charts. The music video, however, did spark some controversy particularly for, in the words of Jamie Portman from The Daily Gazette, a "calculated blending of sex and religion." So you tell me, is this video offensive or powerful? Or, as I imagine Madonna intended, does it have the capacity to offend simply because it is so powerful?

Flashback #2: "I don't want to start | Any blasphemous rumours | But I think that God's | Got a sick sense of humour."

Depeche Mode's "Blasphemous Rumours" hit the UK charts in October 1984. It was the band's 12th UK single and it was a double A-side with "Somebody." Both tracks were from their fourth studio album, Some Great Reward (1984). Suicide and religion are definite hot buttons, especially when ascribing a "sick sense of humor" to a major deity. They did struggle a bit with getting airplay for this song, at least in the UK (according to Ferris and Gahan in 2006). But both lyrically and arrangement-wise, it is one of the densest and complex things Depeche Mode has recorded.

Flashback #3: "Hope you find it in everything, | everything that you see."

Howard Jones. His debut album, Human's Lib (1984), was the very first CD release I purchased. In fact, I purchased it even before I had a CD player! "Hide & Seek" was the third single released from this album, and although it didn't chart all that well in the US, it did peak fairly high in other countries reaching well into the top 10. This track looks at the origin of the universe itself, leaning heavily on Eastern rather than Abrahamic themes. It's darker than most of Jones' early work, but I still find it uplifting, or at least pleasantly contemplative.

Bonus Flashback: "And the less I seek my source for some definitive | The closer I am to fine."

Usually I follow the rule of three when doing Flashbacks. But I missed last week, so I figure I owe all y'all at least one extra tune. And here it is! "Closer to Fine" was the only single released off Indigo Girls' second studio, but first major label, effort. It did OK on charts, peaking at #26 on Billboard Modern Rock Tracks, #52 on Billboard Hot 100, and #48 on both Billboard Mainstream Rock Tracks and Billboard Adult Contemporary charts. But it is considered a fan favorite and Indigo Girls often close shows with it. And with the song's message of looking within and trusting source rather than authorities, it's not hard to see why "Closer to Fine" continues to resonate with so many.