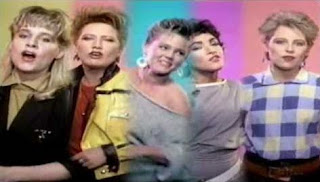 [Talking a Good Show] -- The Go-Go's were the first all-female band to top the Billboard album charts by writing their own songs and playing their own instruments. Yes, folks, there were several "girl groups" with writing and playing chops before The Go-Gos, but none of them cranked out hits quite like these ladies. And 35 years ago this month, they released their third studio album, Talk Show (1984), which peaked at #18 on the Billboard 200 albums chart. Although the album was critically well-received, it was a commercial disappointment. Not sure that was due to a slight change in style or too many half-realized songs (as AllMusic claims), but Talk Show still has its gems. Talk Show also marked the last time the original lineup would record an album together ... until 2001. So, what tracks have I selected from the Go-Go's last album of the 80s? Read and hear more after the jump.

Flashback #1: "Been running so long | I've nearly lost all track of time | In every direction | I couldn't see the warning signs."

Our first flashback of the day is "Head Over Heels," the first single from The Go-Go's third studio album, Talk Show (1984). This track peaked at #11 on the US Billboard Hot 100, the best of the three singles. But it wasn't enough to help this album keep pace with their prior two efforts, even with its boost from MTV where the music video peaked at #3. I have a special fondness for this music video because I love the 60s aesthetic they're pulling with the band performing on that multi-color set. (And, aside from the instruments, no audio equipment is shown! No amps, cords, mics, etc.)

"Turn to You," the second single off Talk Show, had a solid hook. And the band got to play it on that bastion of 80s popular music, the Solid Gold TV show. But neither of those features were strong enough and the song barely cracked the top 40, peaking at a mere #32 on the U.S. Billboard Hot 100. I honestly had forgotten all about "Turn to You" until I saw this video of the Go-Go's performing it on the aforementioned Solid Gold. Now I'm kicking myself for my poor memory because this is a great song. Also, I'm pretty sure I saw this episode when it first aired.

There was a third single off Talk Show, "Yes or No." But I don't recall ever hearing it let alone thinking much of it. So, for our final Flashback this week, I've selected "I'm the Only One." It's the lead off track for Side B of the album, and it honestly should have been a single! In my opinion, it's at least on par with "Head Over Heels." It's a fully realized song with hook, attitude, and tremendous energy. You can check out a direct recording or this live footage from Greek Theatre (August, 1984), but I'm kind of obsessed with this rehearsal footage from a 1984 cable TV special.