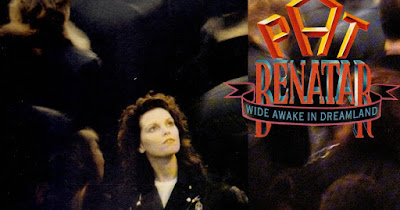 [Back to Dreamland] -- I love Pat Benatar. In my opinion, she is one of the all-time great rock and roll singers. You won't get me to budge on that. This week, the Flashback revisits not her greatest record, but one that is a significant milestone in her career. In July 1988, Benatar released her seventh studio album, Wide Awake in Dreamland. Dreamland was not only Benatar's last album of the 80s, but her last guitar-driven rock record for a while. And, unfortunately, it marked the beginning of a decline in Benatar's popularity (outside of the faithful, like myself). The songs on this album seem more realized than those of previous efforts, relying less on fire and anger, more on message and mood. Is this growth? Sometimes an artist grows before her audience is ready. Now, as a total package, Dreamland does not match the chart-topping prowess of Benatar's earlier records. It does, however, boast memorable tracks like "Too Long a Soldier" and "Suffer the Little Children" as well as the hit single, "All Fired Up" ... which you can revisit along with two other key tracks after the jump.

Flashback #1: "All fired up (now I believe there comes a time) | All fired up (when everything just falls in line)."

"All Fired Up" was the lead single off Wide Awake in Dreamland. It peaked at #2 and #19 on the US Mainstream Rock and US Billboard Hot 100 respectively.

Flashback #2: "Once there was a man, and his words became a song of love."

"One Love" never charted in the US, but it did reach #59 on the UK Singles Chart. It's a bit more synth heavy than her usual fare, but Benatar's voice keeps it from sinking to the level of mediocre experimentation. If anything, it's a rather good meditation on interfaith and cooperation.

Flashback #3: "Somethin' brings us together, keeps tearin' us apart | The wounded are much wiser, we'll just take it from the start."

"Don't Walk Away" is another single off Dreamland that didn't chart in the US, but it should have. That's all I'm going to say. The embedded video is my only argument and evidence.