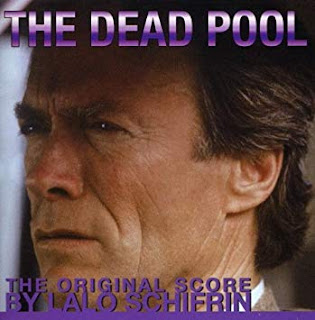 [The Other Dead Pool] -- The Dead Pool was the fifth, last, and least profitable Dirty Harry film. It was released on July 13, 1988: 30 years ago this weekend! Not to be confused with the 2016 film named for a wisecracking and fast-healing mutant mercenary, this Dead Pool followed Clint Eastwood's Detective Harry Callahan as he tried to unravel a dead pool, a game in which high rollers are betting on deaths of celebrities (and a serial killer tries to rig the game). Liam Neeson, Patricia Clarkson, and Jim Carrey (in his first action/dramatic role) are also featured. On top of that, there's also a cameo with Slash of Guns N Roses fame shooting a harpoon. Lalo Schifrin composed the film's score, making him the main composer for four out of the five Dirty Harry films. However, there was initially no soundtrack album released to accompany this film. Fortunately for soundtrack fans, Schifrin released the music he recorded in 1988 on his own label in January of 2009. The "Main Title" is sufficiently 80s-themed, with keyboards and electronic percussion blended with orchestral instruments. The rest of the album is a coherent set of themes, but the compositions are played with serviceable jazz and pop arrangements. There's really nothing to distinguish the tracks from any other suspense or detective story of the time period. In fact, they would be right at home on films from a few decades earlier. But while the soundtrack breaks no new ground, it is a solid listen from a fine composer. You can check out a few tracks after the jump.

"Main Title" is short, snappy, and definitely a Dirty Harry kind of track.

The end credits from The Dead Pool, "San Francisco Night." Here, Schifrin takes the Dirty Harry theme from the first movie and slows it down while also jazzing it up.