Rogue One: A Star Wars Story

A little late to the party here but well worth the wait I would say.

I have been wanting to see this movie since it came out. I missed going with my friends and Brainwise was not too interested in going otherwise. So I missed it in the theaters. Overall though I am ok with that after seeing it now on my TV. I am just glad I didn’t miss it completely.

I like the new Star Wars films better than the old, all of the old. I believe this is because when I saw the old films I was not the biggest sci-fi fantasy fan. And then when I was finally into it, it was the newer three movies and they just were not good to me. I distinctly remember laughing...with everyone in the $1 theater during the Yoda fight scene. It was like throwing a muppet around and seeing what would happen. Anyway, I digress, Rogue One was a thousand times better than the others but I would still choose The Force Awakens as my favorite overall (I have not seen The Last Jedi yet, shock there I know).

It is funny that I have seen all the newest Star Treks in the theater and pretty near opening day but Star Wars except for The Force Awakes when I went with my friends have all been later and now only on my TV. Thank you Netflix. Of course it was during the most recent Star Trek that I fully determined and realized I am a Trekkie. I like science more than fantasy. 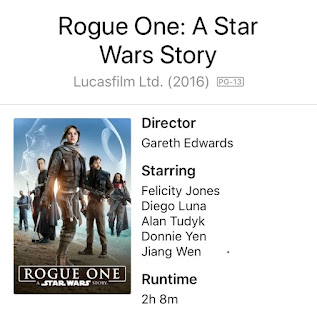 I hadn’t really thought about this until about half way through the movie. I realized... none of these people show up in the later movies... none. And it definitely made me sad. I was getting to know these people, like these people. While I know what they did was admirable and saves everything later, it did not make it easier to watch them get wiped out. Although this is not uncommon for me, I really cried at the end of this movie. I was grateful that I hadn’t seen it in the theater at that point. I really cried hard.

I loved Jyn and would love to have seen more of her life and her. Hmmm as I sit here thinking about what to write, I am realizing that no character is ever fully realized in this movie. The characters simply exist for this story and this story only. I don’t even mean that in the way that they all die, I mean that there is no background and no support for these characters outside this specific story. And while it seems odd, I am ok with it. I still enjoyed the movie and I still cried for the people but I guess I am ok that they will not appear again.

I definitely loved the humor from K-2SO and Chirrut and they were definitely the hardest, along with Bohdi, to watch die.

There were two things that really jarred me in this movie, though. The Polar Expressed Grand Muffin Tarkin (i am leaving this auto correct because it is too funny)  Polar Expressed young Princess Leia. Oh my that was not easy for me to watch. They didn’t fit, they definitely were out of place and I think just showing Leia’s robe would have been enough - we knew who it was. They were important parts but I had a very hard time with them not appearing real, although I am sure I may have freaked out more if they looked so real that you couldn’t tell they weren’t.