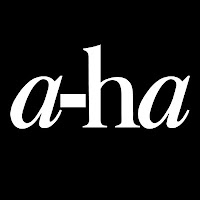 [a-ha-coustic] -- I know you're probably expecting a Friday the 13th connection, but I decided to go in a different direction. A stripped down direction. But first, some background. A-ha's 1985 debut album, Hunting High and Low, was an international success. All four of its singles charted within the top 40 of most countries' music charts. In the US, their first two singles broke the top 20, and their debut single, "Take On Me," peaked at #1. The strength of the album's singles, and the band's video rotation, helped propel Hunting High and Low to a peak position of #15 on the United States Billboard 200 (album chart). A-ha was even nominated for a Grammy (Best New Artist in 1986). They didn't win, but this nomination made A-ha the first Norwegian band to earn a Grammy nod. And let's not forget about that iconic animated/live-action music video.

But this week's post is not about that 1985 track. No. See, I recently learned that a-ha played at Giske Harbour Hall in Norway last June. Yes, they played last June, and the news I'm about to share made the round in October. I'm behind the feed! I get it! Anyway, during Norway show, a-ha performed a hauntingly beautiful, stripped down version of "Take On Me."

If you liked that, I have good news for you: that version of "Take On Me" and 16 other a-ha hit tracks are available on MTV Unplugged: Summer Solstice, an album and DVD they recorded while in Norway. Read all about it on their website.

But before you dash off to their website, perhaps you'd like to check out more of this concert. Well, I've got you covered with a little help from DailyMotion: