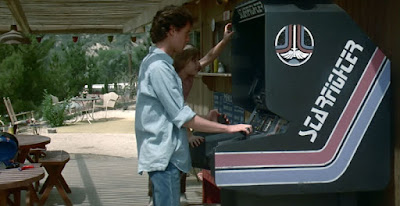 [Greetings, Starfighter!] -- In 1984, Lance Guest, Dan O'Herlihy, Robert Preston, and Catherine Mary Stewart played across filmscreens across America as The Last Starfighter rocketed into our collective move consciousness. Lance Guest, in the movie's title role, portrayed a smart teenager named Alex Rogan. Alex was consumed with one goal: Escape from the trailer park where he grew up. Wait, make that two goals: He wants to beat the high score on the STARFIGHTER arcade game. While he has big plans to make it "out there," the game is his only other escape from the drudgery and isolation of the park. However, little does Alex know that the game is actually {** SPOILER ALERT **} a recruiting tool for finding people capable of being actual starfighters "to defend the Frontier against Xur and the Ko-Dan Armada!" Anyway, this movie deeply resonated with me, a 16-year-old nerd who dreamed of escaping his remote part of Pennsyltucky. I wasn't much with video games, but I truly identified with Alex's yearning for more than the sparse options of his present situation. And The Last Starfighter remains one of my all-time favorite films to this day.

So, any time there's buzz about a potential reboot of or sequel to The Last Starfighter, I get a little cranky. Fortunately, such stories come and go pretty quickly without cause for concern. But earlier this month, another contender for a Last Starfighter redo (possibly a requel?) made the rounds, starting with this tweet. And there's concept art, so this one might actually have legs. Or thrusters. Whatever.

Anyway, at least this gives me an excuse to revisit the soundtrack to the original (and, so far, only) Last Starfighter film. Craig Safan composed and conducted the movie's score, which came out the same year as the film, 1984. There were two expanded re-releases -- the first in 1995 and the second, more complete one, in 2015 -- but the soundtrack is currently, and unfortunately, difficult to acquire. With a total of 22 possible tracks for me to choose from, which items made the playlist this week? Well, insert your quarter so you can read and hear more after the jump. (That was a video game joke; I'm not really asking for your quarters.)

Flashback #1: "You belonged to a friend of mine | for the longest time and I'm sure you knew | the thought of touchin' you | never crossed my mind."

"Never Crossed My Mind" is one of the two pop-oriented tunes that Clif Magness performed on The Last Starfighter's soundtrack.

Flashback #2: "Underneath the neutral moon | We take sides across the room | Neither one will say they're wrong | How long can this go on?"

Clif Magness' recording of "Incommunicado" for The Last Starfighter has all the hallmarks of an 80s movie tune.

The bulk of The Last Starfighter's soundtrack album is orchestral in nature. It's a score, written and conducted by American composer, Craig Safan. So, why not end this week's Flashback post with Safan's stirring and heroic "Last Starfighter Theme"?