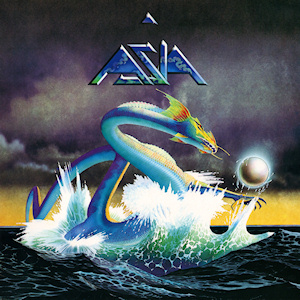 [ASIA] -- Geoff Downes, John Wetton, Steve Howe, and Carl Palmer were already famous individually for playing in some of the biggest prog-rock bands of the 70s. And the sound they created in the early 80s as the four-piece called Asia owed more to the 70s than the New Wave that was taking over the radio. Still, their eponymous debut album was released in March of 1982 -- 36 years ago! -- and spawned two huge hits. Besides the hits, other songs on this album also achieved considerable radio play. Asia's sound was slickly produced yet still muscular, likely due to Palmer's steady percussion and Wetton's driving bass. All these elements propelled the album to great success, including peaking at #1 on the US Billboard 200 albums chart. Asia's music was majestic in scope -- you have to play at a grand level if you choose to name your band after a continent -- and I still feel something magical in the opening chords of just about every song on this album. Hel, I still have my original vinyl copy. I can't tell you how many times I tried to draw the serpentine dragon from this album cover, but I can tell you that I no longer have any of those attempts.

If you'd like to sample some tunes from this album, you can read and hear more after the jump.

In this week's intro, I mentioned that Asia's music was majestic in scope. However, their lyrics bordered on overly cheesy and melodramatic. Take this week's first Flashback, and the album's debut single, "Heat of the Moment." Before we even get to the chorus which features the song title (itself something of a cliché), we are subjected to four straight lines of clichéd phrasing: I never meant to be so bad to you | One thing I said that I would never do | A look from you and I would fall from grace | And it would wipe the smile right from my face. The only band to place more clichés in one song is GTR! To date, "Heat of the Moment" remains Asia's biggest chart success. How could it not be? Just look at the amazing video they released. It features literal interpretations almost line by line (how helpful)! But, hey, don't take my little jabs to mean I dislike this song. Quite the contrary: I love it. And the record buying public in 1982 loved it as well, pushing it to #4 on the Billboard Hot 100 chart as well as the top position of the U.S. Billboard Mainstream Rock chart.

Flashback #2: "Insanity has found its way to TV screens."

"Wildest Dreams" opened side two of Asia (1982).  Or, if you have a CD copy, it's the sixth track. It was not released as a single, but it did receive airplay in late '82 and maybe early '83. And given the saber rattling and posturing of current politics, I figure this is a most appropriate song to share. Well, it's either appropriate or just depressing. Either way, the message against using soldiers as mere pawns comes across quite clearly in this well-crafted tune.

Flashback #3: "Lost, like the tears that used to tide me over."

Asia's follow-up single to "Heat of the Moment" was "Only Time Will Tell." It was a top 20 hit for the band, reaching #8 on the U.S. Billboard Mainstream Rock Tracks and #17 on the US Billboard Hot 100 charts respectively. And you might notice more of that clichéd phrasing that worked so well in their first single. There is an official music video, but I decided to embed a video from the '89-'90 reunion tour featuring original members John Wetton (bass, vocals) and Carl Palmer (drums). For this run of tours, keyboardist Geoff Downes and guitarist Steve Howe -- both of whom were part of the original foursome -- were replaced by John Young and Alan Darby respectively.