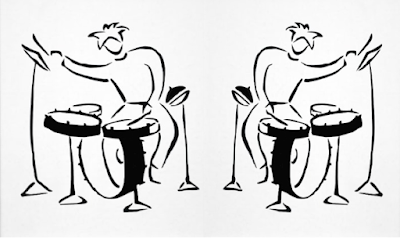 [Double Drumming] -- Many bands have one or more percussionists in addition to their drummer. Double drumming, however, refers to bands that have two drummers playing two drum kits at the same time. The intent could be to lend a fatter sound, such as when they mirror each other rhythmically, or to add complexity or interest to the main rhythm. If I had to guess, I would say it's mainly done because it looks so cool on stage. Now, double drumming has not been all that uncommon in music history, but it was not all that wide spread a technique in the 80s. So, it was a bit difficult for me to come up with three good examples for you in this week's 80s Flashback. Fear not, though, for I have prevailed, and I present a trio of double drumming instances for your 80s delight. Perhaps you can chime in with additional examples in the comments. To see what I found in the 80s vault, read and hear more after the jump.

.38 Special formed in the mid-70s and tapped that same southern rock vein that Lynyrd Skynyrd and Molly Hatchet explored before developing their own arena rock style. Although they shifted their sound, and achieved great success in doing so, they maintained a connection to their southern roots. Our first Flashback of the day is their breakout hit, "Hold On Loosely." It was the lead single off their fourth studio album, Wild-Eyed Southern Boys (1981). It soared to #3 on the Hot Mainstream Rock Tracks and peaked at #27 on the Billboard Hot 100. In 1987, it appeared as the B-side to "Back to Paradise," the theme song for Revenge of the Nerds II: Nerds in Paradise. Truth be told, a little .38 Special goes a long way in taking me to my personal audio paradise.

Our next Flashback artist isn't so much a band as it is members of three separate bands playing together. At its core, this outfit consists of three members of a classic 70s band who are joined by musicians from two other bands. They joined forces for only one historic -- and widely criticized -- set during the day-long, dual venue show known as ... Live Aid. In case you haven't figured it out, I'm talking about the "reunion" of Led Zeppelin on 7/13/1985. Surviving members Jimmy Page (guitar), Robert Plant (vocals), and John Paul Jones (bassist and all around wunderkind) were joined by drummers Tony Thompson (Chic and The Power Station) and Phil Collins (Genesis and solo).

The biggest band in the world in the early 70s, Zeppelin broke up after the tragic death of drummer John Bonham in September of 1980 (which was just before a planned concert tour, their first since 1977). In the first part of the 80s, numerous reunion rumors surfaced, but nothing came of them. So the announcement that Zeppelin would play at Live Aid was very exciting for fans. And that excitement turned to disappointment in the first few minutes of their three-song set. There is plenty of finger pointing about what went wrong -- Plant was hoarse, Page's guitar was out of tune, Thompson had not fully recovered from a previous auto accident, Collins had not rehearsed enough, etc. -- but we'll let the results speak for themselves. Here is "Rock n Roll" from Live Aid at JFK Stadium in Philadelphia, PA:

Flashback #3: “We're the dandy highwaymen and here's our invitation | ‘Throw your safety overboard and join our insect nation!’”

Our final Flashback of the day is Adam and the Ants' most popular single: "Stand and Deliver" from the 1981 album, Prince Charming. You'll notice the artist is Adam and the Ants rather than simply Adam Ant. Adam Ant (i.e., Stuart Leslie Goddard) formed the Ants in 1977. They performed and recorded as Adam and the Ants until Adam disbanded the group in early 1982 due to, according to him, the other band members' lack of enthusiasm. However, in 1981, there seems to be enthusiasm a-plenty on this record. "Stand and Deliver" entered the UK top 40 at #9 and remained there for a total of five weeks. The music video established the look of Adam and the Ants -- and Adam Ant as a solo artist -- for years to come, and it also influenced other new romance and glam acts to take up the pirate look in the mid to late 80s.

Once again, I remind you that the rule of three applies when doing Flashbacks. As I've made my three offerings, that's all till next week. Dedicated 80s-philes can find more flashbacks in the Prophet or Madman archives (where today's post originally appeared on August 23, 2013) or via Bookended's 80s Flashback tag. As always, your comments are welcome on today's, or any other, flashback post. And if you like what I'm doing here, please share the link with your friends. If, however, you don't like the flashback, feel free to share it with your enemies.