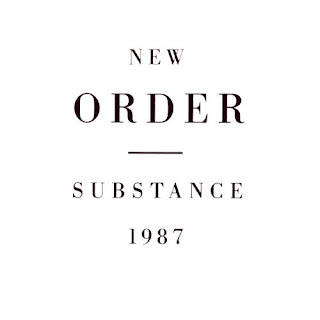 [Substance 1987] -- Another week, and another beloved album turns 30. This time, it's New Order's Substance 1987, which was released on 8/17/1987. This double LP featured the 12-inch versions of all of New Order's singles to date and a previously unreleased single, "True Faith." The CD and cassette releases included the singles' respective B-sides (the latter of the two having a few extra tracks). Here, in one place, fans had New Order's best work. It was also, for the most part, their most danceable (due in part to the fact that the 12" mixes were designed for dance clubs). One of the best descriptions of this album that I've read comes from AllMusic.com reviewer, Stephen Thomas Erlewine, who wrote that it "expanded the notion of what a rock & roll band, particularly an indie rock band, could do."

As I think about it, I probably didn't hear this record until September of 1987, after I returned to Penn State for the start of my sophomore year. Someone in Holmes Hall would have been playing it, but I'm not certain whose copy I first heard or borrowed. I'm guessing that Paul had the double album while my roommate, Jeff, had the dual cassette. Not sure who among the North Halls gang first had the CD. I did eventually have my own CD copy sometime after I left Holmes for my R.A. gig in Atherton. To this day, I keep the 12" versions of these singles on my phone. Just in case I want to listen to them while driving around.

I cannot pick just three tracks from this compilation, so I found a video that has both discs of the CD release. Enjoy!