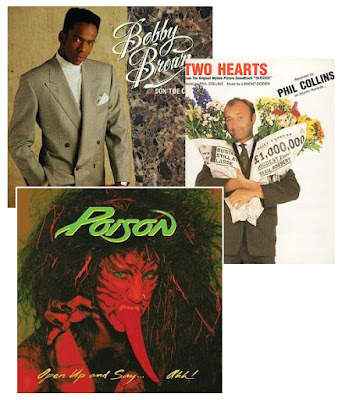 [First Flashback of the New Year] -- I've missed the last two weeks of 80s blogging. Travel and family obligations over the holiday season ganged up on me. And I'm sure there was some wasted time in there as well. But that's in the past, just like the whole of 2016 itself. We have a new year, brimming with possibility, and, perhaps, just a slight aroma of despair. So, I will do my best to move forward ... in my honoring of a past decade. Speaking of past decades, the calendar for 1989 is a dead ringer for that of 2017. That means you can expect me to mine 1989 for blogging content. Just like I did today. The Flashback for 1/6/2017 revisits the top three songs on the Billboard Hot 100 for 1/7/1989.  Do you remember what topped the charts 28 years ago this week? Well, read and hear more after the break to remind yourself! (But I think my accompanying image might have provided a clue or three).

Our first Flashback this weekend is the #3 song on the Billboard Hot 100 for January 7, 1989. "Two Hearts" was one of two Phil Collins songs recorded for 1988 British film Buster in which Collins also starred along with fellow musicians Julie Walters, Larry Lamb and Sheila Hancock. The rest of the soundtrack album was mainly a collection of 60s tunes. I'm not necessarily a fan of Buster the movie, which is something of a reworking of The Great Train Robbery (1963), but I am a fan of this soundtrack. Collins wrote "Two Hearts" specifically for Buster. And although it is only in the #3 slot at this point in the new year, it would eventually earn the top position in both the U.S. and Canada. On top of that, "Two Hearts" also snagged a Golden Globe and a Grammy. Now, despite its presence on a 60s-heavy soundtrack, and its Motown pedigree in producer Lamont Dozier, "Two Hearts" doesn't sound very ... um ... 60s. However, it does have a very 60s-looking music video featuring Collins as all four members of a band. And as the film editor. And as ... the role he played in Buster. There was a second music video filmed, which features Collins in a wrestling match, but the less said about that particular piece of film ... the better. So, please enjoy the Four Pound Notes performing "Two Hearts."

Flashback #2: "I don't need permission | Make my own decisions."

Between the end of 1987 and spring of 1988, Bobby Brown was working on his second solo album. The former frontman of boy band New Edition, Brown wanted to make a statement, particularly in response to his critics. So he penned "My Prerogative." The second single off of Don't Be Cruel (June 1988), "My Prerogative" became Brown's first #1 hit. But at this time in 1989, it was sitting in the #2 slot on the Billboard Hot 100. The success of "My Prerogative" would also propel Don't Be Cruel to the #1 slot on the Billboard 200 album chart and keep it there for six weeks (OK, the other four top ten singles helped, too). The music video features Brown swaggering his way to perform the song on stage. Once on stage, he is flanked by two woman, one playing keytar and the other playing saxophone. Watching the video now takes be back, way back, to well before Brown became a reality TV cautionary tale.

"And here's Poison with the #1 song in the country!" This week in 1989 was the last time such a phrase would be uttered in the U.S. "Every Rose Has It's Thorn," The glam metal band's third single off their sophomore effort, Open Up and Say... Ahh! (1988), was the band's only #1 single. And it reigned for a glorious three weeks, from December 24, 1988, through January 7, 1989. Proving that you shouldn't underestimate the power of a ... well, of a power ballad. While I'm making light of the power ballad phenomenon, I should point out that this particular ballad has it's genesis in a true heartbreak: The moment that Poison frontman, Brett Michaels, learned his live-in girlfriend was not faithful. And the music video includes that story in color frame outtakes interspersed with scenes of Michaels playing acoustic guitar by himself, and in concert with Poison.

Also of note: Can you believe the band's management tried to convince them that this song would end their career?