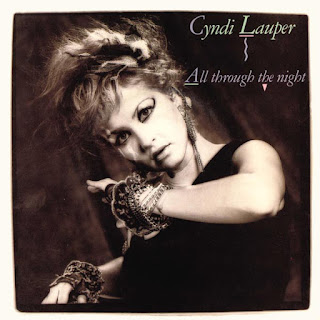 [That Was Unusual] -- In October of 1983, Cyndi Lauper released her debut album, She's So Unusual. Since then, Cyndi has become something of an icon for freaks, weirdos, and anyone who just wants to have fun. But just over a year later, on December 8, 1984, Lauper earned her place in music history. It was this week, 32 years ago, that Lauper's fourth single, "All Through the Night," entered the top five on the Billboard Hot 100. That is a feat in and of itself, of course. But the cool thing for for Lauper is that her previous three songs also charted well, with each one breaking into the top five. This made her the first woman in the 26-year history of the Billboard Hot 100 to have four singles from the same album make it into the top five!

You can read more about that Lauper's record and that moment in the previous link. So, for the rest of this week's Flashback, let's just enjoy the music videos. You can see them after the jump!

Flashback #1: "I come home in the morning light | My mother says when you gonna live your life right."

Flashback #2: "If you're lost you can look and you will find me | Time after time."

Flashback #4 (Bonus!): "All through the night | They have forgotten what by day they lack."

That's all I have till next time. Dedicated 80s-philes can find more flashbacks in the Prophet or Madman archives or via Bookended's 80s Flashback tag. As always, your comments are welcome on today's, or any other, flashback post. And if you like what I'm doing here, please share the link with your friends. If, however, you don't like the flashback, feel free to share it with your enemies.