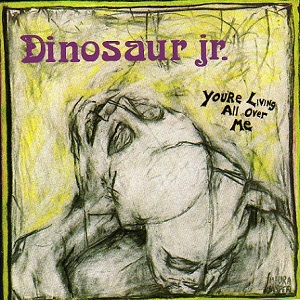 Released on December 14, 1987, through SST Records, You're Living All Over Me was Dinosaur Jr.'s second studio album. Dinosaur Jr. was still known as simply Dinosaur when the album was first released, but a lawsuit forced the band to change their name. Shortly thereafter, SST recalled the album and re-released it with attribution to the newly minted Dinosaur Jr. What the album lacked in sales was more than made up for in terms of its legacy. It is considered a classic of the indie and alternative genres, and it also has a place in the book 1001 Albums You Must Hear Before You Die (revised and updated edition, 2010). This album isn't big on singles, so how about I just embed a video that has the album's full audio? Yes, let's do just that!