[Fab Five to Notorious Three] -- Ever see something that reminds you of a great 80s band? Well, when I saw the above truck image, it put me in mind of Duran Duran's second greatest hits compilation, Greatest (1998), and the post I wrote about it in 2012. So, why not delve into it all over again this weekend?

Now, if you have this album, you will recognize this track listing (snagged from Wikipedia): 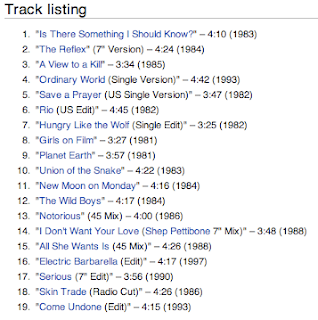 Do you notice anything about it? Well, if you haven't noticed it yet, you might when you read and hear more after the break.

So, do you see what I saw in the song listing? The songs are not in chronological order of release! I usually listen to this album on shuffle, so I didn't notice the non-chronological order until I specifically wanted to compare Duran Duran's latter 80s efforts to that of their early releases. To do so, I delved into the Fab Five's release history, and created a new iTunes playlist: 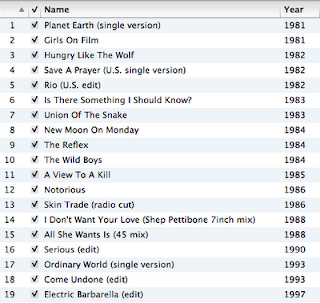 With this updated playlist, I could listen to Duran Duran's hits as though I were investigating an aural time capsule. And I found that my suspicions were well-founded: Duran Duran was a much different band after 1985. Of course, given enough time -- and, usually, money -- most bands will change. They don't always change for the better: the trend they were sailing runs its course, or the main songwriters run out of ideas, or their senses become dulled with over indulgence.

But sometimes bands do improve. They become (or hire) better musicians, they fine tune their songwriting, or maybe they break into new musical territory. And in the latter half of the 80s, we saw this happen to the so-called "Fab Five" of Duran Duran. Prior to 1985, their drumming was mediocre (timing was actually kept using a click track), the guitar work was merely texturing, and -- as much as I enjoyed it -- their synth work was due more to (over)programming than any real keyboard talent. Oh, and speaking of talent, the boys' main talent was being photogenic. And that was all just fine for pop-rock and roll! But during 1985, the members of Duran Duran took a break ... from each other. John and Andy Taylor collaborated with Robert Palmer and Tony Thompson in the rock/funk supergroup Power Station, while Simon Le Bon and Nick Rhodes explored more atmospheric sounds in the form of Arcadia. When they next regrouped, it was to record a James Bond theme, a gig that had them working with a longtime soundtrack composer (see the first flashback below). After that, in 1986, two original members left the band. This left a core trio of Le Bon, Rhodes, and John Taylor to carry on. They worked with various session musicians (eventually offering guitarist Warren Cuccurullo full membership in the band), and plunged into more complex music, consciously trying to shed their teen heartthrob image. They no longer burned their way up the charts, but the music was better.

Wow, that was rather long-winded. How about we review a few samples of their mid to late 80s fare and see if you agree with my assessment? I should inform you that, despite this post's cover image, "Hungry Like the Wolf" does not appear in this week's playlist. After all, it precedes the band's post-1985 output. However, if you want, you can catch it before continuing with my selections.


Flashback #1: "Face to faces, secret places, feel the chill | Night fall covers me , but you know the plans I'm making."

Our first flashback this week previously appeared in the Bonded flashback back in March 2011. So I am borrowing heavily from my previous write-up. And, although I am kicking off this week's flashback with Duran Duran's wonderful Bond theme, "A View to a Kill," it is not the song that kicked off the second half of their career in the 80s. That was the job of "Save a Prayer" from Arena (1985). However, I much prefer "A View to a Kill" and I'm in charge of the playlist here, so ...

Anyway, back to business.

A View to a Kill (1985) was Roger Moore's final appearance as 007. He had wanted out after For Your Eyes Only, and it is no wonder he left after this one: at age 57 (at the time of the film's release), he was the oldest actor to portray the spy. He no longer had the grace of his earlier films, so they had to employ nearly 100 stuntmen for all the action. Although a box office success, A View to a Kill, the film, was almost universally panned. Moore has, on several occasions, expressed regret about being a part of this film. Perhaps a younger Bond would have helped, but Christopher Walken's crazy machine-gunning villain, Max Zorin, and his bodyguard, May Day (strangely acted by Grace Jones), were just not up to the standards of villains in the Bond canon. Fortunately, the title song, co-written by John Barry and Duran Duran, was a bouncy joy. And it is still the only Bond theme to reach #1 (Paul McCartney's "Live And Let Die" and Carly Simon's "Nobody Does It Better" had each peaked at # 2). Apparently, boys were asked to do the song after John Taylor (Duran Duran bassist and lifelong Bond fan) approached producer Cubby Broccoli at a party, and "somewhat drunkenly asked 'When are you going to get someone decent to do one of your theme songs?'" [Notorious: The Unauthorized Biography, André Deutsch/Carlton Publishing, UK. 2005.]  Bond composer John Barry worked with the Durans, sorting out bad ideas from good ones, all of which came out of a drunken night of composing. After completing the song, Duran Duran performed three different versions of it, two of which make no reference at all to the classic James Bond theme. Still, the song shot up the charts, hitting #2 in the U.K. and #1 in the U.S. So, click here for the theatrical version, or dance into the fire with (a slightly abbreviated version of) Duran Duran's music video for "A View to a Kill"...

On our second flashback today, we find the trio of Simon Le Bon, Nick Rhodes, and John Taylor embracing everything they learned from their non-Duran Duran projects to record the band's fourth studio album, Notorious (1986). The band was a trio at this point because original drummer, Roger Taylor, had retired earlier in 1986. And guitarist Andy Taylor ... well, let's just say there was some difficulty in reigning Andy back into the band, and he was eventually let go. But the recording process was not without positive experiences. In addition to their side gig influences, funk-meister Nile Rodgers was at the helm of this record as producer, and his musical DNA is all over the album's title track -- from the tempo, to The Borneo Horns, and finally to Rodgers's own guitar work. As the album was a big departure from their previous dance-pop efforts, many fans were confused. Still, the album did well enough on the charts (peaking at #16 and #12 in the UK and US respectively). The title track was this album's first single, and it reached #2 on the Billboard Hot 100 and #7 on the UK chart.

It took another two years before Duran Duran released another studio album. In 1988, seeing their collective career at a crossroad, the band took a stab at remaining musically relevant by releasing Big Thing, their "house music" album. Filled with synth- and bass-heavy grooves, as well as a few numbers that held a passing familiarity with their lush arrangements of previous recordings, Big Thing was a big risk. The music was aggressive and in your face, but it was more reactionary than exploratory. And, for me, it succeeded because it yielded what is very likely my favorite Duran Duran track, which is our final flashback of the day. "I Don't Want Your Love" swaggers and sways across the room like a player, but you smile at it rather than shake your head over its ridiculous posturing. And it fared even better on the charts: #14 UK Singles Chart, #4 Billboard Hot 100, #13 Billboard Modern Rock Tracks, and #1 Billboard Hot Dance Club Play. However, poor album reviews and the relatively lackluster charting of the third single rendered the album a failure in most circles. And it was the last time Duran Duran had significant airplay until 1993.

The standard version of "I Don't Want Your Love" is below, but if you ask me the Shep Pettibone Mix is the very best recording of this song.


Once again, I remind you that the rule of three applies when doing Flashbacks. As I've made my three offerings, that's all till next week. Dedicated 80s-philes can find more flashbacks in the archives. As always, your comments are welcome on today's, or any other, flashback post. And if you like what I'm doing here, please share the link with your friends. If, however, you don't like the flashback, feel free to share it with your enemies.