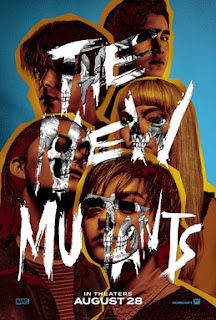 I didn't know what to expect at all. Brainwise said it was in the X-Men franchise and that it might be a horror. I saw that it was PG-13, so how much horror could there really be.

Well, there were scary things for sure and some shocking things too but I guess I think of gore with horror and I would say this was more mind horror and less gore but I was perfectly ok with it and it didn't scar me or anything, which is good overall.

I didn't know any of the characters and I might say I am not sure I still do. I felt like the movie makers had lots they wanted to show but didn't know how to put it all together so they did the best they could to put the pieces together to make a movie. Now, mind you, I didn't hate the movie at all and I might even watch it again if it were to come up but it is certainly nothing I will rave about.

The actors did their job and I did care about them and would watch more if made, but if they don't make any more movies about them, I will be ok too. I don't feel I wasted my time watching the movie and we did say that we could always turn it off if we didn't like it but we watched the whole movie. I realize these are not glowing endorsements and if you are not into the X-men franchise I would definitely tell you to skip it.

Along those lines I like the X-men but this pushed the far boundaries of their tales and I did not know the characters or story lines at all. So I think if you know the X-men well you might like this more as you would catch the themes, stories and characters and may have more invested in it. Again though I didn't hate the movie but I could have liked it more for sure :)