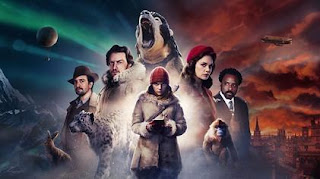 This post was originally only going to cover Season 1 but we couldn’t stop watching, so it is a post for both seasons.

That said, it did not ruin my enjoyment of this series. WOW!!!! The music is incredible, the cinematography is immense and the CGI is barely noticeable to me. Dafne Keen as Lyra is perfection. Exactly how I pictured/remembered her from the book. The animals/daemons are simply adorable and created perfectly. There are many times I wondered if they were real or not, to me that is a good sign of the amount of time they took to create them.

I did remember a lot of the Golden Compass but since this is not distinctly one book per season, but almost I think,  there were things I didn't know during the first season and I knew even less in the second. I will add that watching the two seasons now, I want to go back and re-read the first book and read the other two books. I am curious as to what was different and if it made a difference. Since it has been so long since my reading and watching the first book, I could not recall what was in the book or not in the series.

Again, like so many other shows we have watched lately, it is another very timely tale and I am sure my blood pressure must go up while we are watching. There are so many storylines that just get me so angry but it is all necessary and part of the story. I am sad we have to wait quite some time for season 3 but I will patiently wait as I know it will be well worth it.