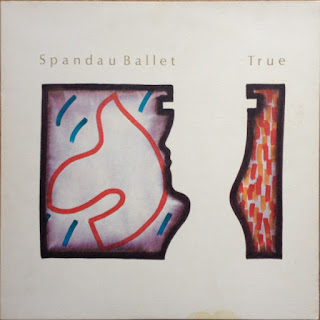 [This Month is True] -- In March of 1983, Spandau Ballet released their third studio album, True, and nothing was ever the same for them. This was the record that earned them international notoriety, particularly with the one-two punch of the hit title track and "Gold" (both of which I still own on 45!). Often filed under Smooth Jazz as often as they are labeled as pop, New Wave, or synth-pop, Spandau Ballet were an early standard bearer of the New Romantic movement. And True gave the band their first #1 album in the UK as well as a top 20 album on the US Billboard 200. After the title track peaked at #1 in the UK Singles Chart and #4 on the US Billboard Hot 100, their follow-up, "Gold," reached #2 in the UK and cracked the top 30 in the US. But by the time their next album, Parade (1984), rolled around, the US record buying public was no longer enamored by New Romantics. Still, for one shimmering month, Spandau Ballet were international radio juggernauts. And "True" can still evoke fond memories of days when radio and MTV were more than magical.

Flashback #2: "Always believe in your soul."

Flashback #3: "Communication let me down."