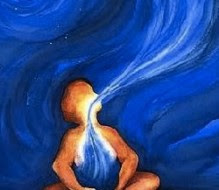 [Breathe - Redux] -- OK. seven years ago this week, this very day, I had to drive from Bucks County, PA, to the Cleveland Clinic to see my father. Dad was sent there after he had been admitted to the local ER with difficulty breathing, particularly in pushing out carbon dioxide. After a consult with his doctors in Cleveland, where his bone marrow transplants had been performed, the decision was made to life-flight him to the Clinic and place him in the cardiac ICU. The morning after he was sent to the Clinic, I packed up the car, drove across PA, picked up my mother, and finished a 9+ hour drive by checking into the Inter-Continental Suite Hotel in Cleveland. At the outset of this trip, we had expected Dad to be in the Clinic for several days. Instead, we found that we were to spend the rest of March in Cleveland. After my first week at the Clinic, I settled on "Breathe" as the theme for my Friday 80s Flashback of 3/22/13 . The reason for this theme will become apparent after you read the original intro for that Flashback which is re-posted here in its entirety. And, "Breathe" also seems an appropriate theme for a week in which we've been bombarded with COVID-19 related news and updates, particularly cancelations and postponements of large events. So, if you can spare several minutes, read my post from 2013 and enjoy the three embedded music videos. Well, at least enjoy the videos.

Those of you who follow me on Twitter, or know me in some other way (either virtual or IRL), know that I have been out of town visiting my father in the ICU. He was admitted last Tuesday evening due to shortness of breath. Since admission, he has been shuttled between two different ICU departments (cardiac and medical), undergone a battery of tests, and subjected to intubation -- with that last one occurring twice! The various doctors and experts on staff seem to know what the problem is -- Dad's muscles are too weak to properly ventilate -- but they don't know the "why" of the problem, or how to reverse it ... yet. So, as you can well imagine, breathing has been very much on my mind lately. Unfortunately, the kind of breathing I have in mind isn't exactly enshrined in 80s tunes. But I'll do my best to deal with this week's theme as well as support my family during this medical crisis. If you want to know what made the playlist this week, you can read and hear more after the break.

Flashback #1: "What's in your heart will never change."

Because I am hoping for a positive change in my father's condition, I think John Waite's "Change" from his debut album, Ignition (1982), is a great tune to lead off today's Flashback (even though it already appeared in the 2013 New Year's Flashback). I would have liked to have used the tune in which John Waite starts with "Every time I think of you | I always catch my breath," but "Missing You" doesn't quite fit the theme here. Anyway, "Change" was written by Holly Knight and originally recorded by her band, Spider, in 1981. Don't be surprised if you haven't heard that version. Even John Waite's single failed to crack the Billboard Hot 100 when it was first released. However, Waite's version became a top track on AOR radio stations and was a popular video on MTV. In 1985, Waite's recording of "Change" was included on the Platinum selling soundtrack for the movie Vision Quest. The movie is a coming of age drama based on the Terry Davis novel. The story centers on a Spokane high school wrestler who falls in love with an older woman. The love story is, of course, a subplot that temporarily derails him off his goal of dropping to a different weight class so he can challenge an unbeaten rival from another school. You think you have weight loss ambitions? This guy targeted a drop from 190 pounds to 168 pounds, while still competing in a highly physical and challenging sport. I've included the John Waite video below, but you might want to see scenes from the 1985 move while listening to our final Flashback.

Flashback #2: "Turning and returning to some secret place inside."

My father doesn't exactly need his breath to be taken away, but he does need respirator assistance in ventilating (i.e., getting rid of carbon dioxide in his system). In 1986, Tom Cruise needed help from Kelly McGillis to become a better person and pilot -- er, rather, his "Maverick" character needed help from Charlotte "Charlie" Blackwood. At least, that's what the romantic sub-plot of the action drama Top Gun was all about. The synthpop band Berlin recorded the film's love song, "Take My Breath Away," a chart topper (#1 on the Billboard Hot 100, in the UK, and on the Canada Adult Contemporary chart) as well as an Academy Award winner for Best Original Song (1986). It is also probably the least Berlin-like song in the band's catalog. And that makes sense as the song was written by the songwriting team of Giorgio Moroder and Tom Whitlock rather than founding member and original bassist John Crawford who was the primary songwriter for the band from 1978 through 1987.

Flashback #3: "Every breath you take | Every move you make."

The Police's fifth and final studio album was also the band's finest release and most contentious album to make: Synchronicity (1983). Sting referred to the album -- or the making of it and the subsequent tour -- as "the beginning of the end." Still, it contains some of the band's most popular singles. Synchronicity's first single, "Every Breath You Take," hit the #1 position on several charts and won two Grammy awards: Best Pop Performance by a Duo or Group with Vocal and Song of the Year. The album spawned three more hit singles and won a Grammy Award for Best Rock Performance by a Duo or Group with Vocal. And I'm betting that you probably guessed this tune would anchor this week's Flashback. How could I resist when my father is currently struggling with every breath he takes, and while we and the medical staff are indeed watching every move he makes?