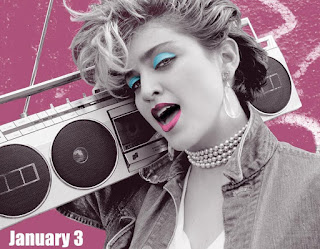 [New Year!] -- My last Flashback post was 11/22/2019. Seems my studies, travels, and other tasks got in the way of my blogging. But at least I'm starting out the new year right, with a brand new post for the very first Friday of 2020. For this first Flashback post of the year, we'll revisit the top three songs from this week in 1986. Do you recall what you were doing 34 years ago this week? I was probably just getting back to classes for the final semester of my high school career. Beyond that, I have no idea. But I do remember all 10 songs that were in the Billboard Hot 100 for the week. Counting down songs 10 through 4, we had:

Released in September 1985, "Alive and Kicking" by Simple Minds could be found in the #3 slot on the Billboard Hot 100 this week. It peaked in the top 10 in many charts worldwide.

Flashback #2: "My girl wants to party all the time."

After conquering stand up, Eddie Murphy pretty much ruled our TV and movie screens in the 1980s. So, it makes sense that he would also try to tackle the music charts. In July 1985, his debut album, How Could It Be, hit the album charts. The album peaked at #26 on the Billboard 200 and #17 on the Top R&B/Hip-Hop Albums charts. And this week in 1986, the album's lead single, "Party All the Time," was in its second of three weeks in the #2 slot.

Flashback #3: "As we go down life's lonesome highway | Seems the hardest thing to do is to find a friend or two."

The 1985 film White Nights starred ballet dancer Mikhail Baryshnikov and tap dancer Gregory Hines. The film has some great dance scenes featuring the leads, but it kind of fell short in the plot and story departments. However, it had two gems on its soundtrack. One gem was "Separate Lives" performed by Phil Collins and Marilyn Martin. The other gem was this week's final Flashback written and recorded by Lionel Richie: "Say You, Say Me." Well, it was in the film but did not appear on the film's soundtrack album. Motown did not want Richie's first followup to Can't Slow Down (1983) to be on some other label (Atlantic Records). So they held it for his 1986 solo album, Dancing on the Ceiling. Maybe that was a good move on their part. "Say You, Say Me" peaked at #1 on both the US Hot 100 and the R&B singles charts.