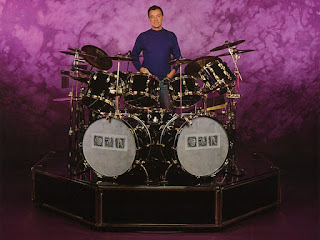 [Remembering Neil Peart] -- I learned today that drummer extraordinaire Neil Peart passed away. The announcement came today, but he passed on 1/7/2020, after battling brain cancer for the last three years. Neil provided the beat for the Canadian power trio, Rush, perhaps the greatest progressive rock band in music history. His bandmates were the phenomenal bassist, and nasally vocalist, Geddy Lee, and power-chording guitarist Alex Lifeson (who, though not as vaunted as his bandmates, did rank in Rolling Stone's list of the 100 greatest guitarists of all time). Neil was also Rush's primary lyricist, crafting songs inspired from philosophy and science fiction.

Neil was bit by the drumming bug in his pre-teens. But before his parents would let him have a drum set, they gave him "a pair of sticks, a practice pad, and lessons" and told him he had to stick with the lessons for a year. And, wow, did his drum kit evolve over time. Rather than go through the details here, I'll direct you to Drum Magazine for their stellar rundown of the man and his drums ("Mean Mean Stride: The Drums Of Neil Peart;" September 12, 2013).

Rush debuted in 1974, but they had a strong 80s presence, releasing six albums between 1980 and 1989. Wikipedia refers to the bulk of this time as the band's "Synthesizer-oriented era." And it's probably the era I know and remember best as it covered my high school and college years. So, for this memorial Flashback, I'll pick two tracks from those years and ... a third track showcasing another side of Peart's skills. To find out what tracks I chose, read and hear more after the jump.

"YYZ" was a track on Rush's 1981 release, Moving Pictures. It was not one of the singles, but it is quite the showcase for this band's technical prowess. For your pleasure, I'm sharing a live performance captured by the band's 1989 live album, A Show of Hands, which was released with an accompanying VHS or LaserDisc (a DVD version became available in 2006).

Flashback #2: "Memory banks unloading | Bytes break into bits | Unit one’s in trouble | And it’s scared out of its wits."

Spinning the tale of a renegade android, "The Body Electric" was Rush's second single off their 1984 album, Grace Under Pressure. It's based on is based on the Twilight Zone episode, "I Sing the Body Electric." This song rarely makes any best of lists for Rush -- though it did rate inclusion on a list of favorite songs about robots. I've just always enjoyed its interplay of base and drums.

This is from 1994, but it is too awesome to not be included. Here is Neil Peart jazzing it up and nailing a fantastic drum solo with The Buddy Rich Big Band on "Cotton Tail"! If you want, you can also check out how Buddy Rich himself played the tune in 1985.