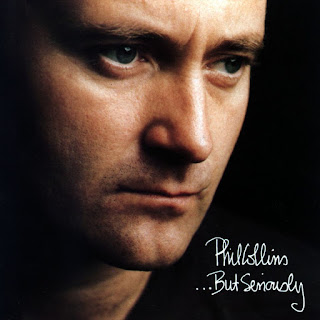 [...But Seriously] -- It's the first Flashback of 2018! This weekend, we recall an album released on November 24, 1989: ...But Seriously,  Phil Collins' fourth solo studio album. This record was a hit on both sides of the Atlantic, sitting in the #1 album position for multiple weeks in both the US and the UK. In fact, it was sitting atop the Billboard 200 this very weekend in 1990.

"Wait," I hear you protesting. "Why are you talking about 1990 in an 80s music post?" Well, you have to remember that here on the Friday 80s Flashback, we consider the 1980s to comprise all years between 1980 and 1990 inclusive. My Flashback, my rules. And Phil Collins was a fave artist of my mother, who passed away unexpectedly last October, so you have to expect him to pop up here from time to time. And, yeah, I'm a fan of the man's music, too.

...But Seriously spawned six singles, all of which charted on the Billboard Hot 100. Which ones have I selected for this week? Read and hear more after the jump.

"Something Happened on the Way to Heaven" was ...But Seriously's third single. The UK release was April 16, 1990, while the US release happened a few months later in July. And in the US, it peaked at #4 on the Billboard Hot 100. I love the horn section on this track. And like many people, I often identify the song with the repeated line "How many times can I say 'I'm sorry'?" -- which, in the music video, is associated with the antics of a dog that enters a concert hall where Phil and his band are rehearsing this very track. Maybe it's just me, but I feel there's something kind of Oh! Heavenly Dog-ish going on.

"Another Day in Paradise" was the first single off ...But Seriously. It hit the charts in October 1989 and peaked in the #1 position of the US Billboard Hot 100 on December 23, 1989. It spent four weeks at #1, including this weekend 28 years ago. It also received the Grammy Award for Record of the Year (1991). Not bad for a song about a casual observer watching a man cross a street to ignore a homeless woman.

Flashback #3: "Though your hurt is gone, mines hanging on, inside | And I know it's eating me through every night and day."

Released January 15, 1990, "I Wish It Would Rain Down" was the second single released off ...But Seriously. It was a top 10 hit globally, peaking, for example, at #3, #1 #7 on the US Billboard Hot 100, RPM Top 100 in Canada, and UK Singles Chart respectively. The song's success probably owes more than just a little to Eric Clapton's guest bit on lead guitar. The gospel choir doesn't hurt, either. And the music video ... well, it's pretty much a short movie. It clocks in at just over eight and a half minutes, and the actual performance of the song doesn't start until the 2:25 mark. And as incongruous as it might seem to have an 80s tune in the 1930s setting of the video, it really works with the story. It's pretty humorous, too.